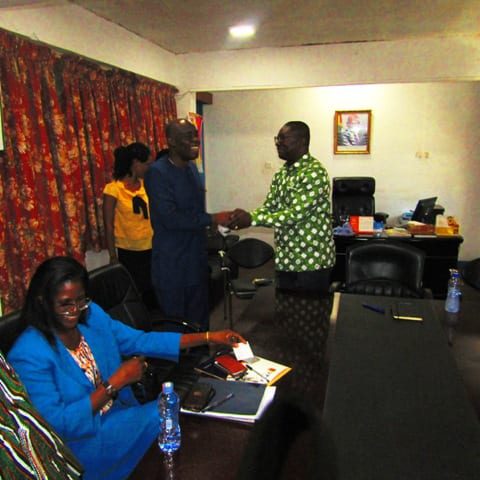 The University of Professional Studies Accra (UPSA) has underlined its readiness to partner the Ghana News Agency (GNA) to enhance their productivity and contribution towards national and continental development.

He said this when he led a team of Members of the Governing Council to visit to the GNA to among others, market his vision as the Chartered Institute of Marketing, Ghana’s (CIMG) “Marketing Man of the Year 2018”.
The Executive Director of the CIMG, Mr. Kwabena Akuamoah Agyekum, was with the team.

CIMG, an advocate for responsible and ethical marketing practice for marketing and businesses, honoured Prof. Okoe Amartey at its 30th National Marketing Performance Awards, held in Accra, on Friday, September 27, 2019.

The Awards recognise marketing practitioners and organisations that rely on innovative strategies and modern marketing practices in the realisation of their business successes.

Prof. Okoe Amartey was recognised for his ‘goal-oriented leadership and immense contribution towards making the University a global brand; while enhancing the image and effectiveness of the institution, promoting research and competing in the global higher education environment’.

Mr Albert Kofi Owusu, the General Manager of the GNA, led his side in the discussions that underscored the importance of generating quality manpower as well as viable and credible information towards building a prosperous nation for a well-informed citizenry.

Prof. Okoe Amartey said the GNA was the first port of call because of its long-term reputation as a credible source of information and position as the mother news organisation, which served other media houses with news and information.

He said it was unfortunate that a national asset such the GNA would be facing resource challenges for its operations, and attributed the situation to a marketing deficiency strategy.

The UPSA, which used to suffer a similar fate, he said, would, therefore, assist the GNA to rebrand and derive more revenue from products that would reduce its dependency on the state purse.

Prof. Okoe Amartey said the UPSA, formerly the Institute of Professional Studies, had contributed immensely to national development through its first class academic and professional alumni, serving in critical positions.
He added that, because it was not marketing itself, its brand and image suffered.

Things have now changed – it has claimed its rightful place in the world of academia and professionalism with transformational programmes and infrastructural development.

The student population of the university, established by an individual, Mr. Opoku Ampomah, in 1967, and taken over by the State in 1979, has grown steadily to 15,000 plus and boasts of a state-of-the-art conference facility, which can seat more than 3,500.

It offers certificate, diploma, undergraduate and post graduate programmes in Accounting and Finance, Marketing, Law, Communication Studies, Business Administration, among others.
He praised his management and staff for the team work, hard work and unity of purpose, which he said, were bearing the fruits.

The Vice Chancellor expressed the hope that the cooperation with the GNA would further the achievements in their mutual interests.

Mr. Owusu, for his part, welcomed the partnership, saying it was coming at a time that the Agency was developing a strategic plan that would position it as a market leader in the next couple of years.

In the era of media pluralism, he said, the GNA needed to distinguish itself as the reference point for credible and reliable information, which met the needs of all sections of society and projected the African cause.
There is an added opportunity of giving practical training to students from credible institutions such as the UPSA, to attract the best brains to drive the vision.