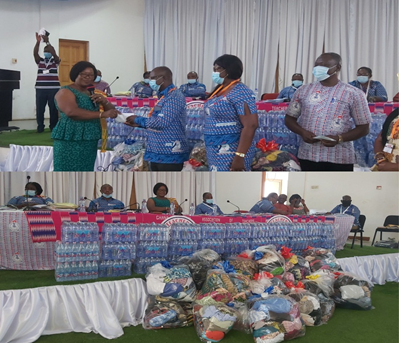 The Ghana National Association of Teachers (GNAT) has presented quantities of relief items to flood victims in the Upper East and Northern Regions.

The items included various clothing for men, women and children, footwear for both male and females, 100 packs of bottled water and beddings.

Added to these was a sum of GHȼ5,000.00 which would be shared among victims in the two regions as a token for their upkeep.

The floods, which occurred last September, was as a result of the opening of the Bagre Dam in Burkina Faso and days of torrential rainfall in the Northern parts of the country.

It was reported that the incident led to the deaths of 10 persons, destruction of large hectares of farmland and hundreds of livestock, and washed away parts of major roads, cutting off some communities.

Phillipa Larsen, President of GNAT, speaking at a short ceremony in Kumasi, to present the items to GNAT representatives of these regions, said it formed part of the Association’s corporate social responsibilities.

She described the incident as unfortunate, adding that, everyone was susceptible to such mishaps.

Mrs. Larsen indicated that the Association would continually contribute its quota to assist the needy in the society.

Mr. Atta Longiya, Northern Regional Chairman of GNAT, receiving the items on behalf of the victims, expressed gratitude and pledged to distribute them accordingly.