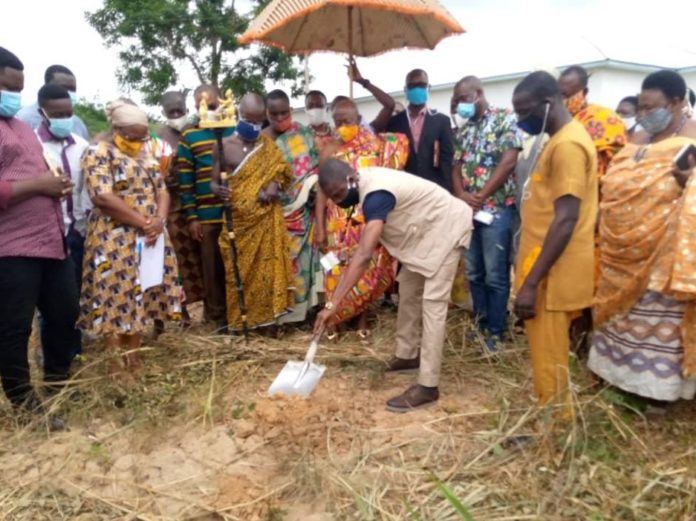 The Executive Director of the Ghana National Petroleum Corporation (GNPC) Foundation, Dr Dominic Eduah, has cut sod for the construction of an artificial football pitch for the Queen’s Senior High School at Sefwi Anhwiaso in the Bibiani-Anhwiaso-Bekwai Municipality of the Western North Region.

The project which comes with a football pitch, an inner perimeter fence, floor lights, washrooms, reverse and spectator stands, goal post and changing room, all value at $250,000, is expected to be completed in six months.

A Sanitary Facility is also being constructed for the school by the Foundation.

Speaking at a short ceremony to hand over the site plan to the contractor, Dr Eduah explained that, the GNPC Foundation was the Corporate Social Investment Arm of the Ghana National Petroleum Corporation and was dedicated to impacting on the lives of ordinary Ghanaians through community and social intervention programmes.

He said the Foundation’s operations were driven by three thematic areas of Environment & Social Amenities, Education & Training and Economic Empowerment and that it was the vision of the government to support not less than ten million Ghanaians in the next five years through GNPC Foundation Initiatives.

Dr Eduah said the Foundation’s mandate had been extended to cover the length and breadth of the country, adding “we now operate in all the sixteen regions in the country, hitherto our operations were limited only to the oil enclave”.

He hinted that the Queen’s SHS AstroTurf formed part of twenty of such ongoing projects across the country and was hopeful that the Foundation would accomplish its target of thirty Astro Turf before the end of the year to support sports infrastructure development.

The others are a 20 seater toilet facility at Anhwaiso, a six-unit classroom block at Queen’s Senior High School, supply of Medical Equipment to Health Facilities, as well as scholarship packages for brilliant but needy students and several other supports.

The Paramount Chief of Sefwi-Anhwaiso Traditional Area, who doubles as a board member of GNPC, Ogyeahoho Yaw Gyebi II, commended the President of Ghana and the Executive Director of the Foundation for their numerous support in the Municipality within the three and half years in office.

He noted that the artificial pitch would go a long to help enhance soccer in the area, so as to move football from a sandy ground to an ultra-modern Astro Turf in the next six months.

Ogyeahoho Gyebi who is also the President of the Western Regional House of Chiefs, hinted that through the Foundation some students from the Region have been sponsored to pursue their degree and PhD programmes abroad.

He said about two hundred students were also sponsored to study health related courses in Cuba.

For his part, the Municipal Chief Executive (MCE) for Bibiani-Anhwiaso-Bekwai, Mr Alfred Amoah, lauded GNPC Foundation for its infrastructure development projects both completed and ongoing in the Municipality.

He expressed his gratitude to the President Nana Akufo-Addo, Ogyeahoho Gyebi II and the Executive Director of GNPC Foundation for their “unforgettable legacies” being implemented in the Municipality.

Mr Isaac Ebi-Kwaw, the Assistant Headmaster of the Queen’s Senior High School on half of the school commended the Paramount Chief, MCE and the GNPC Foundation for the kind gesture.

All Nations University Ready To Build A Multi-disciplinary Facility

Construction of 32 TVET Centres To Begin