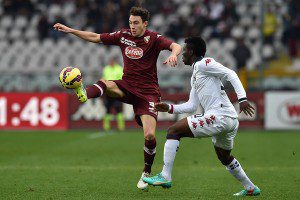 Just as the original Michael Essien looks certain to be leaving Serie A in the near future, another one looks to be emerging as his successor. Meet the young midfield dynamo, Godfred Donsah. The 18-year-old hails from Ghana, and made the move to Palermo in 2012 from DC United Agogo, after impressing when on trial.

He was then sent on loan to Hellas Verona last season, but only mustered one senior appearance in the club?s 2?1 win over Atalanta. This taste of top-flight football was enough for Donsah to crave more, and he made the summer switch to Cagliari in search of regular action.

Under Zdenek Zeman ? famed for his insistence on giving youth a chance ? in the first half of the season, Donsah was given his fair share of game-time, despite rarely starting matches from the off.

It was only when one of Cagliari?s favourite sons Gianfranco Zola took the reins in late December, that Donsah started to emerge as a key component of the Sardinian side.

Donsah, who names Essien as his idol, shows all the trademarks of the man they called ?The Bison? in his repertoire. Boasting an all-action style of play, Donsah provides high-intensity approach in both the defensive and attacking facets of the game, and has showed he isn?t overawed despite his tender years. Donsah has also shown his versatility, with the youngster being as adept as right full-back as he is in his preferred position in the heart of midfield.

His goal on the weekend ? a pile-driver from the edge of the area ? to earn his side a deserved point away to high-flying Torino, showed another side of Donsah?s game that is yet to be exposed and added to his already exciting portfolio.

Zola has given the given the ball to Donsah, and the youngster has ran with it so much so that he is now one of the first names on the team sheet.

With Cagliari entrenched in the relegation zone, three points from safety, it shows how much faith Zola has in Donsah, when perhaps most coaches would go with the more experienced options to try and steady the ship.

Elite clubs are taking notice, and not only the ones in the Serie A. English Premier League outfit Tottenham Hotspur were accredited with interest in the young Ghanaian in the January transfer window, and are reportedly set to monitor his displays until the end of the season. Murmurs of interest were also traced from Germany, with giants Bayern Munich and Borussia Dortmund also keeping tabs on the player. A move to a bigger club in the future and a senior call-up to the Ghanaian national team beckons, provided Donsah continues to develop as projected.

With the youngster indicating that ?hardwork, determination and extra training? are the reasons as to why he has enjoyed such a blistering start to his footballing career, Donsah looks a sure bet to meeting those expectations with such a level-headed approach.

As for now, Donsah remains fully concentrated on securing Cagliari?s safety for another season and repaying the faith the club has shown in him.