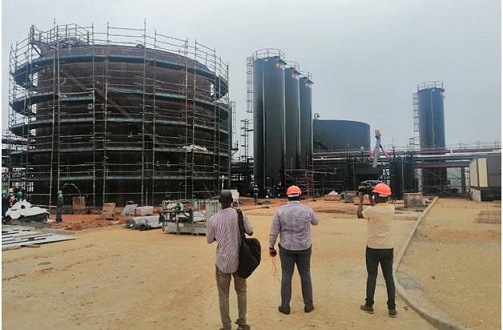 GOIL Company Limited steps into the production of bitumen, a venture Mr Kwame Osei Prempeh, GOIL Managing Director, described as strategy to widen its portfolio and consolidate gains already made in the fuel business.

GOIL with over 400 Filling Stations across the country’s, entry into the otherwise multinational field, is expected to help reduce the cost of the raw material and road construction significantly, according to Mr Prempeh.

Mr Prempeh who is the GOIL Group Chief Executive, explained during a working visit to GOIL bitumen plant, which is under construction expected to be completed in September 2021.

GOIL entered into a joint venture with Societe Multinationale de Bitumes (SMB) of Cote d’Ivoire to construct the $35 million bitumen plant in Tema; with the capacity to produce Polymer Modified Bitumen (PMB) and Bitumen Emulsion.

GOIL sets another leadership as it will be the premier Oil Marketing Company in Ghana to supply PMB for road construction, it will also end or reduce the incident of major road contractors importing the product in bitumen containers from abroad, particularly from Cote d’Ivoire, which has been supplying 80 per cent of Ghana’s bitumen requirement.

Mr Prempeh commended the government for creating the conducive environment for the growth of the petroleum, which had manifested in the giant step by GOIL.

“It is our hope that we will be able to support the government to deliver on its promise of a year of roads,” Mr. Prempeh stated and added that the production of PMB in Ghana would be a game changer for road construction in the country.

The GOIL Bitumen Plant is currently, 82 per cent complete and is expected to have a storage capacity of 6,000 metric tonnes of base bitumen, and will have a production capacity of 240 metric tonnes per day for each of the bitumen emulsion and the polymer modified bitumen plants.

Mr Ben Torkornoo, Technical Consultant to the GOIL Group Chief Executive Officer, said the company would control a 60 per cent stake in the business, while SMB, which would supply the raw bitumen materials, would have a 40 per cent share.

The PMB is a combination of asphalt and more polymer materials and is said to be appropriate for road pavements that experience heavy-duty traffic and extreme weather conditions.

Already, the loading racks, boilers to process the raw bitumen and the PMB and emulsion production plants have all been installed at the facility, along with a control centre, with provisions made for future expansion of the storage tanks.

Mr Torkornoo indicated that installation works on a three-kilometre pipeline from the oil jetty at the Tema Port to the bitumen facility were also underway to allow for product pumping to the facility when the project is eventually inaugurated.

Mr Kwesi Amoako Atta, Minister of Roads and Highways who was part of the inspection team, said “Bitumen, by all standards, is very key to our operations, and I am excited that we will have our own production facility, which will go to significantly reduce our import from Cote d’Ivoire and sometimes Brazil.

“My understanding is that the facility can produce the different bitumen grades we will need for our projects.

“The Ministry is obliged to consume what is being produced by the company, and we will create an avenue where foreign contractors working on projects in the country will source their bitumen requirement from the facility by way of a technical policy that we will create”.

Mr Amoako Atta noted that every Ghanaian knows what nuisance potholes can be, and that if PMB, which hitherto is imported from Brazil, can be produced in Ghana, while creating employment for the country’s workforce, it is a double lucky break.