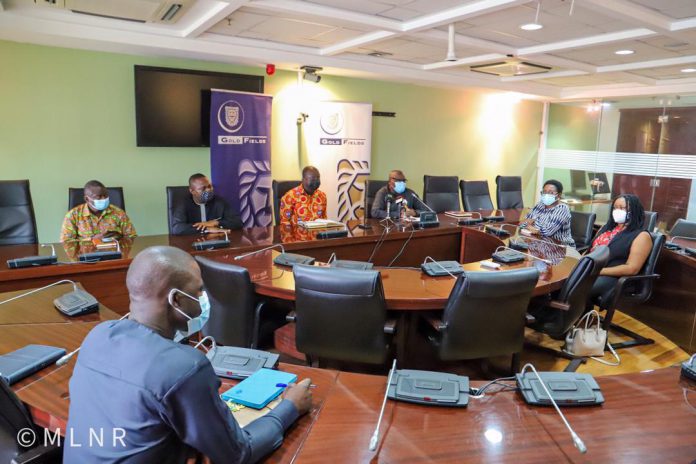 Mr Alfred Baku, the Executive Vice President and Head of Goldfields West Africa, presented the cheque to the Minister of Lands and Natural Resources, Mr Samuel Abu Jinapor, at a brief ceremony, in Accra.

The payment of the dividend excluded other financial commitment the mining firm had already fulfilled, including the payment of 35 per cent corporate taxes, royalties and corporate social responsibilities to communities within its operational areas.

Mr Baku used the opportunity to congratulate the Minister for his approval by Parliament and the subsequent swearing into office by the President.

He pledged the Company’s support to government and partner it towards accelerating national development in their mutual interest.

He said the dividend covered the 2020 fiscal year, which was delayed by the Coronavirus pandemic.

Mr Baku lauded government for supporting the Goldfields-Damang Mine, during the period of financial distress, and expressed the belief that sooner than later, the Damang Mine would become a viable field to pay dividends to government again.

The Sector Minister, on his part, said it was heartwarming and refreshing to receive dividends from a mining firm at a time the world was in COVID-19 pandemic.

The Minister lauded Gold Fields-Tarkwa Mine, for showing good faith and staying true to its responsibility, and urged other large-scale mining firms to follow suit.

Mr Jinapor re-affirmed government’s unflinching support to Goldfields and pledged to partner it in realising the national agenda of eradicating extreme poverty and creating wealth for all.

That, he said, would be mutually beneficial for government and the investment community to thrive.

Market women urged to ensure effective management of their business