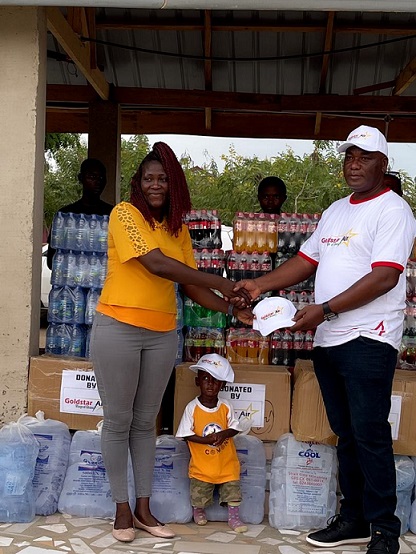 Ghanaian-owned airline, Goldstar Air, has donated some assorted items to Royal Seed Orphanage, at Kwaobondze at Papase No. 2 in the Central Region.

He said the home has contributed its bid towards providing for the less privileged in society, hence the need to contribute to the effort.

Touching on activities of the company, he said the airline is to build a state-of-the-art and trend-setting aviation industry able to compete within the international market in terms of safety, quality, reliability, punctuality, efficiency, and costs.

It aims at improving the Ghanaian economy through the provision of affordable and available international travel and provides job opportunities and airline’s impressive strides in corporate social responsibility, corporate vision, inspiration and pioneering innovations in Ghana are critical parts of the country’s transformation agenda towards economic growth.

Goldstar Air is also projecting a fleet of more than one hundred (100) modern aircrafts to a network of more than ninety (90) key business and leisure destinations across Europe, the Middle East, Africa, Asia Pacific, Caribbean and North America.”

Mr. Bannerman said, the company as part of its corporate social responsibility supported the winner of GBC 80th anniversary special WHAT DO YOU KNOW radio quiz contest with a sponsorship package, donated personal protective equipment (PPE) to the Ghana Forestry Commission and Ghana Police Service.

Among others include sporting activities such as “The Sports Beat show”; a popular sports program on GTV, sponsorship the match between Ghana Black Stars and Mozambique at the Accra sports stadium, donated a trophy to the Assemblies of God church in Greater Accra for its annual fun games, donated boxing materials and cheque to Willpower boxing gym, sponsored Salafest boxing shows at Opera square, engaged in a number of disabled people to support Ghana black stars, sponsored other media organizations sports journalists to cover major tournaments outside and within Ghana and also given sponsorship to other organizations as well.

The donation was done as a Corporate Social Responsibility which is a concept of the airline, called Goldstar Air Care Foundation that targets the integration of social and environmental concerns.

Madam Naomi Amoah, Chief Executive Officer of the Royal Orphanage Home in response thanked the Goldstar Air for its contribution and gave the assurance to the management and staff of Goldstar Air that the orphanage will utilize the items to the fullest benefit of the kids.

Madam Naomi Amoah started the orphanage in 1997 and did the registration in the year 2002 with four children and now she has over two hundred and fifty children from eight (8) months to seventeen (17) years including special children at her orphanage.