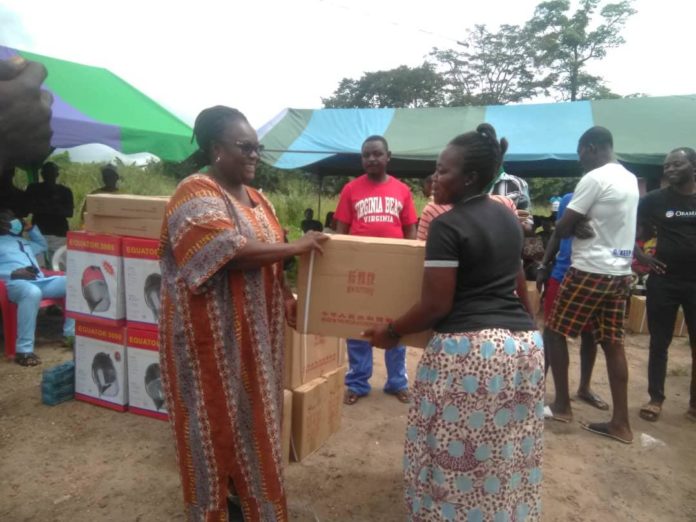 Mrs Naana Eyiah Quansah, Member of Parliament (MP) for Gomoa Central has presented 40 sewing machines, 12, hairdressing dryers and 15 barbering machines to apprentices in the Area to help motivate them to complete their training.

It is also to create jobs to enable the young adults live quality lives and stem the unemployment rate in the Country.

This brings to 400, the number of sewing and hairdressing dryer machines donated to apprentices and master craftsmen and women in the Gomoa Central Constituency since she assumed office in 2017.

She said the government has rolled out quality policies and programmes to attract the youth in the Area and the country at large to learn trades while technical and vocational institutes will be established in every district to promote TVET.

The MP who is also the Deputy Minister of Lands and Natural Resources, urged the people in the Constituency to continue to rally behind the government for President Nana Addo Dankwa Akufo-Addo to continue his good works.
She called on Ghanaians to ignore the inferior tactics adopted by the opposition to discredit the good things being executed by the government.

The MP stated that work on the construction of a Court complex for Judicial service and an office for the National Health Insurance Scheme at Gomoa Afransi, was progressing steadily.

She said the two projects which created jobs for the youth in the Gomoa Central District would be completed before the end of the year.

The Deputy Minister said the Constituency benefited from the One District one Factory (IDIF) policy introduced by the government to boost local economies.

The MP stated that extension of electricity to the communities in the Constituency had been approved by the government and contractors had moved to site to begin work.

On roads, the trunk road from Agona Swedru to Winneba was awarded on contract and it would be asphalted soon to enhance effective transportation of goods and services.

The MP called on the chiefs and people of Gomoa Central to vote for President Akufo-Addo and Mrs Eyiah Quansah for four more years to continue the prudent economic management of the Country.