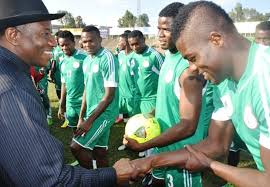 President Goodluck Ebele Jonathan congratulates the Super Eagles of Nigeria on their dogged and hard-fought victory over the Red Devils of Congo this evening in Pointe Noire which has revived Nigeria?s hopes of qualifying for next year?s African Nations Cup Finals.

President Jonathan applauds the Super Eagles? patriotic, determined and very courageous display in front of a very vociferous, aggressive and partisan home crowd which earned them an emphatic 2-0 victory and placed Nigeria in a good position once again for qualification to defend the African Nations Cup which it currently holds at the next year?s finals, now scheduled to hold in Equatorial Guinea.

On behalf of all soccer loving Nigerians, the President heartily commends the Super Eagles for their winning performance in Pointe-Noire which has wiped away the disappointment of their earlier outings in the Nations Cup qualifying series and rekindled the belief of Nigerians in their national soccer team?s ability to bring further glory to the country.

Delos Chang reveals what motivates him to keep working hard