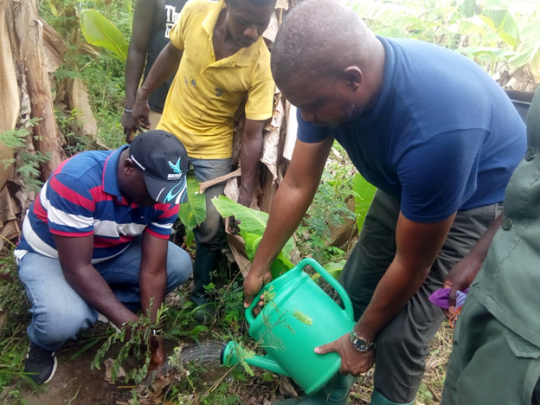 A cross-section of students at the Fijai Senior High School were led in a tree planting exercise by Goshen Global Vision (GGV), a local Non-Governmental Organization (NGO) in Takorad as part of measures to sustain the urban forestry project.

The project is under the auspices of the Sekondi-Takoradi Metropolitan Assembly (STMA) as well as the Department of Parks and Gardens with funding from the US Forest Services (USFS) to restore degraded lands and bio-diversity and eco-system.

Speaking to the Ghana News Agency during the exercise, the Executive Director of GGV, Madam Perpetual Kwakuyi, said 5,000 trees had so far been planted at designated places and social centers such as Nkroful junction to Appolo, Effia-Nkwanta and EKMA headquarters.

The second phase would cover the frontage of the Takoradi Technical University (TTU) as well as Effia-Nkwanta en route Fijai.

Madam Kwakuyi said the second phase would also focus on afforestation and mitigation of climate change in schools.

According to her, 15,000 more trees were expected to be planted before the end of the project, bringing the number to 20,000 trees to be planted within the next four years.

She said the project was motivated by the environmental impact of the petroleum industry, which had brought pressure on arable and parks for construction of logistic warehouses, residential and office accommodation thereby reducing the greenly state of the city.

The headmaster of Fijai SHS, Mr. Kenneth Agbomadzi in an interview, stressed the importance of trees to the environment.

He expressed gratitude go the NGO for such an academic initiative, adding that, the school was in the process of making Agriculture an aspect of Integrated Science and an Elective subject.