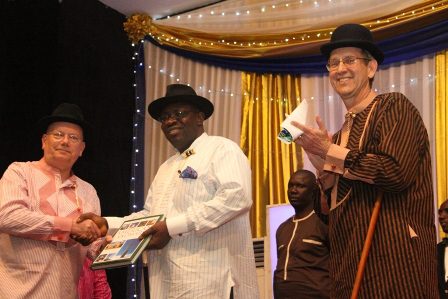 Bayelsa State Governor, Hon.?Seriake?Dickson has urged the?Assistant Secretary of the United States Department?s Bureau of Conflict Stabilization Operations, Ambassador Rick Barton and US Ambassador to Nigeria, James Entwistle to be worthy ambassadors of the state by projecting its true image and that of the Niger Delta.

Governor Dickson made the remark, while speaking at a command performance organized by the state government in?honour?of the two ambassadors, who were dressed in the state?s traditional attires at the Banquet Hall of Government House in Yenagoa.

Governor Dickson, who stated that, their visit to?Nembe?in Nembe Local Government Area has afforded them the opportunity to see for themselves, the lifestyles of the people, challenges and prospects of the state, called on the duo to attract investors to explore the potentials, that abound in Bayelsa to create wealth and employment.

He said Bayelsa has potentials in the tourism sub sector waiting to be harnessed, as they had confirmed through their trip to Nembe, which is endowed with beautiful, serene and alluring environment.

According to the Governor, the US ambassadors now have a better perception and understanding of the true situation of the people of the Niger Delta, particularly the Ijaws, having visited the creeks in the heart of the Niger Delta to experience first hand, the peace and warmth of Bayelsans.

?I like to appreciate the wonderful job Ambassador Entwintsle, and the Consul General, and members and the US mission in Nigeria have been doing in terms of broadening and deepening the frontiers and breaking down barriers that may exist in the relations between our two countries.

?What you have come to Bayelsa for, took you down the creeks to Nembe, which is all part of building partnerships to identify and break down barriers, so that we can make the world a better place.

? On your trip to Nembe, you must have seen the swamps, mangrove forests, the creeks, rivulets, culture in its fullness on display. I want to thank you, that you have been able to give?yourselves?the opportunity to interact more with our people and by so doing, you will be leaving here better informed persons in terms of our situations, traditions and a fair idea of our challenges and our humble efforts to make a difference.

?Our land is one of endless potentials and possibilities.?Tonight, I invite all of you as you leave Bayelsa State, to tell the Bayelsa story and to begin a new narrative about the realities, potentials and the possibilities of the new Bayelsa, particularly under my leadership.

Consequently, he stressed the need to promote a better understanding among the people of the world, as this was the only way they could create wealth, better societies and contribute to global peace.

Responding, the Assistant Secretary of the United States Department?s Bureau of Conflict Stabilization Operations, Mr. Rick Barton, said he was in the state for the first time and expressed optimism, that Nigeria and the United States could be true partners in delivering peaceful democratic process and progress?for?the country.

Mr. Entwistle stated that, he was impressed and deeply touched by the warmth and hospitality extended to him and members of his delegation during their visit to?Nembe?and had a glimpse of the lifestyles and history of the people.

His words: ?The Governor said to us, ?welcome to the heart of the Niger Delta? and then he expanded upon it, ?welcome to the heart of Nigeria? and what we found, is not only have we been welcomed, we have been shown your heart through your culture, food, music, dances, history that you have shared with us and the towns, that we have driven through and on the waterways.

?In every way your heart has been extended to us; it has warmed us and impressed us and we want to share our love with you. We are deeply touched by your generosity of spirit. We are here, because we believe in peaceful democratic process and we are happy to know that, here in Bayelsa State, you are deeply committed to it.

?The young people that we are working with are giving us the same impression and we hope that we can be your true partners in delivering peaceful democratic process.?

High point?of the event was the conferment of?Honourary?Citizenship of Bayelsa on the Assistant Secretary of the United States Department?s Bureau of Conflict Stabilization Operations and the United States Ambassador to Nigeria, Mr. James Entwistle in recognition of their country?s efforts towards making the world a better.

The conferment of citizenship on the US officials was?concretizedwith Governor Dickson giving Ijaw names to Ambassador Barton as ?Izontariowei?, meaning he who loves the Ijaw people, while Ambassador Entwistle was named ?Ebidouwei?, which translates to one who seeks good.