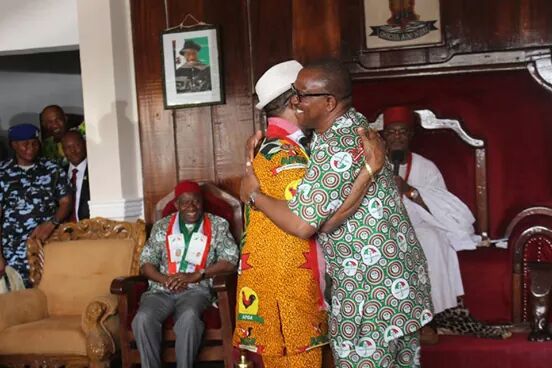 A mild drama? played out today at the palace of? Obi of Onitsha, Igwe Alfred Achebe? when the revered monarch invited the Governor of Anambra state, Chief Willie Obiano and his predecessor, Chief Peter Obi and urged President Jonathan to reconcile them as the duo have been having some issues

President Goodluck Jonathan who did exactly what was asked of him when he paid unscheduled visit to the second Niger bridge project site at the Onitsha-Asaba axis as part of activities marking his official presidential campaign tour to Anambra state. Speaking when he paid a courtesy call on the Obi Alfred Nnaemeka Achebe, the Obi of Onitsha at the Ime-Obi palace, President Jonathan said he decided to pay a visit to the second Niger bridge site ascertain the true position of work at the multi-billion project which he said is very critical to his administration. ?I decided that I must visit the site of the second Niger Bridge to know the level of work there because some people have been saying all sort of things and on my way here, I said I must visit it before coming to pay courtesy call on His Majesty. Work is in progress as the project which will gulp over N1.35 billion is making process?

President Jonathan further disclosed that the federal government has released N10 billion for the projects out of which over N1.5b was used to pay damages as part of efforts to accelerate work at the project.

?We have released N10 billon for the project out of which N1.5 billion was used to pay damages. I also discovered that work is really in progress as the access road that will lead to the bridge that is about 3km have been graded just to make sure that there is access to the site and I spoke with the management of Julius Berger and they assured me that the project will be completed within 40 months? he said.

On his visit to Anamabra, President Jonathan who was accompanied by his wife, Dame Patience Jonathan and Vice President, Arch. Namadi Sambo said he came to seek the support of Ndi Anambra and South East in general ahead of next month general elections.

He expressed optimism that his presidential aspiration would get the support of the people of the zone, adding ?I get a very big support from the South East and that is why I decided to pay a courtesy call on you, Your Majesty to tell you that your son, Azikiwe Jonathan is contesting for the presidential election?