The 2014 national best farmer, Mr.George Asamoah Amankwa, has called for the tree planting component of Savannah Accelerated Development Authority (SADA) to be outsourced to Private Afforestation Developers Organization (PADO) which is solely into tree planting. 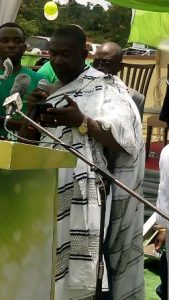 He said the operations of PADO in the last few years clearly place them far above SADA in the area of tree planting.

Government aimed at planting and replanting of trees within the Savannah Ecological Zone as a result of deforestation and global warming effect on society and the environment at large. The Food and Agricultural Organization reports that Ghana has one of the highest deforestation rate in Africa and the world, at 2% per annum.

Between 1990 and 2000, Ghana lost an average of 135,000 hectares of forest per year; amounting to an average annual deforestation rate of -2%. People presume that global warming is only caused by air pollution, greenhouse gas emission from industries, but falling of trees has had great effect on the environment.

“Currently, the Forest Plantation Development Fund, set up by an ACT of Parliament in 2002, does not offer the requisite funding for plantation to farmers who also work closely with smallholder farmers in accessing capital and technical services to enhance farm output.

“As a farmer, and a forest plantation developer with over 600 hectares under cultivation, I will like to add my voice to the call by members of the Private Afforestation Developers Organization-PADO for the creation of a special fund to solely assist developers to aggressively reverse the current trend of deforestation and climate change.”

SADA has suffered major setbacks since in section as an institution to seek to the welfare of its enclaves. SADA embarked on an afforestation project to enhance environmental sustainability and improve the livelihoods of the inhabitants of the project area, but was unsuccessful in during implementation level.

It is against this development that PADO is pushing for total outsource of the said component, for better effective implementation of it to its fullest to save the country from any future occurrences.