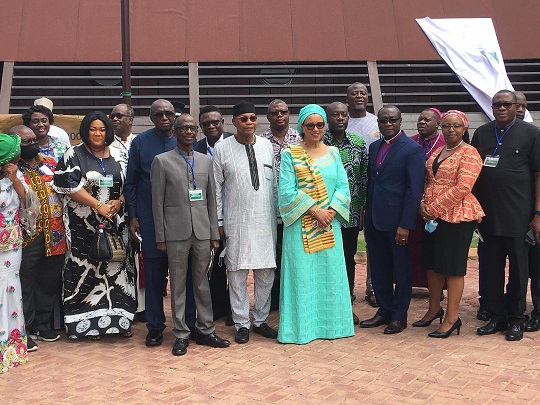 Mr Ambrose Dery, Minister for Interior, has assured Ghanaians of Government’s commitment towards the promotion of political tolerance in the country.

“As a Government, we want to assure the people of Ghana that we mean well, and will continue to commit ourselves to hard work to ensure the peace and security of all Ghanaians at all times,” he said.

Mr Dery made the remarks on Tuesday during the opening ceremony of the National Stakeholders’ Dialogue organized by National Peace Council (NPC) and the Commonwealth Secretariat, at Ada in Accra.

The 3-day event is on the theme: “Countering Post-Election 2020 violence and building consensus for greater political tolerance in Ghana.”

The programme will engage government officials, leadership of political parties, religious bodies, Civil Society Organizations and the international community to navigate a new pathway of national cohesion for Ghana.

It will also ensure that the unfortunate recurrence of unnecessary tensions, threats of violence and destructions of lives and property, before, during and after elections in the country are eliminated.

Mr Dery said a total of 32 violent incidents were recorded in the 2020 elections by the Ghana Police Service in five constituencies.

He said the incidents accounted for the demise of six Ghanaians, adding that such deaths should not be happening in Ghana at this stage of her democracy.

“Government would not relent in its efforts to get those found culpable and prosecute them. Investigations are ongoing and Government has directed the Criminal Investigations Department (CID) of the Ghana Police Service to expedite action in its investigation,” he said.

The Minister said in the 2020 election year, Government provided in full, the budget of the NPC which enabled them play their roles to ensure general peacefulness in the general elections.

“Let me further assure the nation that despite some challenges, the security agencies are in charge of the security of the State.

The recent unfortunate armed robberies are being investigated and sooner than later, the culprits will be apprehended and dealt with according to law. Permit me to acknowledge the support of citizens and residents of our beloved country. We count on you,” he said.

Mr Dery said in the 2021 Global Peace Index Report recently released by the Institute of Economics and Peace, Ghana had moved two points up to become the 38th most peaceful country in the world, the second most peaceful African country behind Mauritius, and the most peaceful in the West Africa sub-region.

However, he said there was much to be done considering that Ghana’s neighbours, particularly Burkina Faso and Mali deteriorated heavily on the Peace Index.

Mr Kojo Oppong Nkrumah, Minister for Information, said democracy was all Ghana had, as such, it was everyone’s duty to protect, guide and improve it on daily basis.

He said since the Fourth Republican constitution began in 1992, Ghana had earned praise for eight successful elections and three handovers of power between opposing political parties occasioned by the ballot box.

The Minister said electoral violence in Ghana stemmed from three main issues, thus; baseless suspicions from political parties against each other, weak understanding of what democracy was and the activities of unscrupulous actors who had become merchants of violence, such as, the snatching of ballot boxes.

He called on participants to suggest lasting solutions to deal with the unseen drivers of violence before they ripped up Ghana’s democracy.