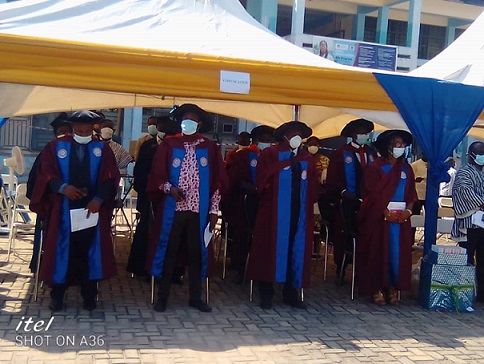 A five-year strategic plan to boost Technical Vocational Education and Training (TVET) has been developed as part of efforts by the Government to develop the industrial skills of young people towards job creation.

Dr Yaw Osei Adutwum, Minister of Education, announced this in a recorded speech at the 17th congregation of Koforidua Technical University (KTU) for Bachelor of Technology graduates.

The initiative, he said, formed part of the Government’s reforms programme to restructure TVET to play it critical role in helping to provide relevant knowledge and vocational skills for young individuals.

Included in the reforms, he said was that all public TVET institutions have been placed under the education ministry.

TVET has been key for skills development in the economy among young Ghanaians as it allows individuals to find skills-related work and also create employment opportunities.

A total of 391 students who completed their course studies in 2020 graduated, out of which 41 obtained first class, 206 obtained second class upper, 142-second class lower and two had passes.

Koforidua Technical University, Dr Adutwum said, like any other technical institution, has gotten its share of infrastructure development.

The government’s achievement in education in the last four years, he also noted, was commendable because there had been reformed governance in the sector.

Dr Osei Adutwum said the government also increased Research Allowance by 200 per cent, which is a component of book and research to improve capacity for scientific research in tertiary institutions.

He added that the students’ loan has equally been increased by 50 per cent over the last few years.
He applauded the leadership of KTU for supporting the government’s efforts in opening up more spaces to absorb the large numbers of free senior high school graduates.

The minister urged the graduates to maintain a positive attitude and strive hard to overcome every societal challenge that they might be confronted with.

Prof David K Essumang, Vice-Chancellor of Koforidua Technical University, said the increasing number of the student population was an issue of grave concern to management.

He said out of about 7,000 students, less than 10 per cent could be accommodated on campus at the GETFund Hostel, adding, more than two-thirds reside in private rented facilities in nearby communities.

He noted that the sanitation situation in some of the private houses was poor and said some of the students were exposed to health hazards.

He appealed to the government to build another hostel and an auditorium to address some of the accommodation challenges facing the school.

Prof Apori Samuel Obeng, Council Chairman of KTU, urged ghanaianssundry to embrace the vocational and technical skills acquisition programme that the government was going to roll out.

“Such a programme is geared towards developing the human capital to solve the youth unemployment problem,” he said.

Mr Borney Yaw, who was adjudged the overall best BTEC student, urged his fellow graduates not to wait for opportunities to be created for them but rather challenge themselves with the knowledge and skills they have acquired to create opportunities for themselves and others.