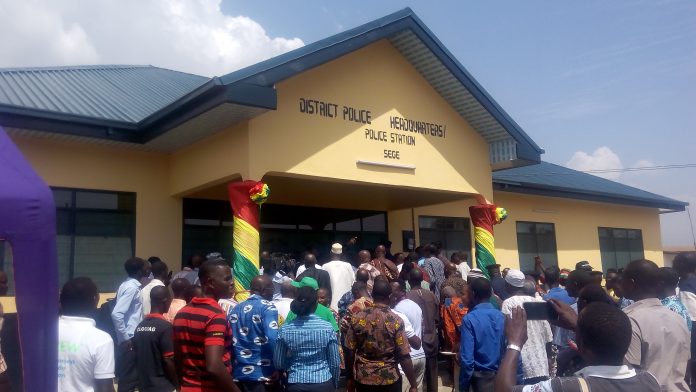 The Minister said the inauguration of the police station was critical in ensuring that there was peace in the area ahead of the December elections.

He noted that the police station used to be housed in a container office and later moved within the premises of the assembly, making it difficult for the service to discharge its duty.

Nii Vanderpuye said the new edifice came with state-of-art facilities and that the Police Service would dispatch personnel there to begin work.

He said the building was an attestation of government commitment to good governance and urged authorities to maintain the facility.

Inaugurating the school buildings at Wokumagbe and Lolonya, the Deputy Minister said the gesture was to expand access to educational facilities in the community to ensure effective teaching and learning.

He said there were more infrastructural development ongoing in the district and urged school authorities to maintain the facilities.

Nii Vanderpuye encouraged parents to invest in their wards education and support them to do their home work to complement the work of teachers in improving their studies.

He advised the students to learn hard and justify the investment made in them by their parents.

The Deputy Minister urged the District Chief Executive to collaborate with real estate developers in the community to build an accommodation for the police personnel.

He appealed to the chief to ensure that anytime they intend selling lands to the estate developers, they should make sure they allocate space for police station for security issues.

Mr Mantey Teye, the District Chief Executive of Ada West, said the building of the police station was to motivate the police service to carry out its mandate in an efficient and effective manner.

He urged the community to collaborate with the police to divulge timely information to facilitate their operations.

Mr Paul Manly Nchorbilla Awuni, the Regional Police Commander for Tema, commended the assembly and stakeholders for the initiative, adding that the ceremony marked government’s quest of bringing policing to the door-step of the people by increasing access to district police stations.