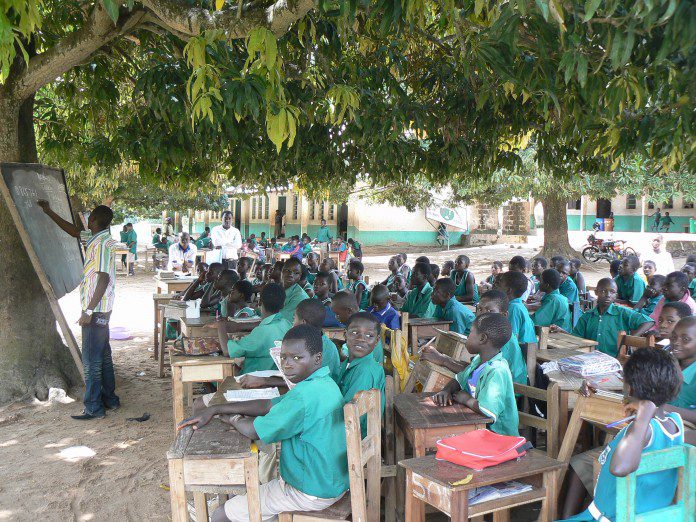 The Government has also eliminated 1700 “schools under trees,” the Deputy Minister added.

Mr Kyerremeh, who was contributing to the debate in Parliament on the 2016 budget estimates, assured Ghanaians that Government was commuted to providing quality education.

He said Government would really make senior high school education progressively free, and that the 27 per cent allotment of the budget to the education sector was one of the best in the West Africa sub region.

…..Mr Kyeremeh said the Government is determined to improve access, quality and equity to education and is adapting strategies to reduce teacher absenteeism, which is one area of concern to the Ministry.

However, in an earlier submission, Mr Moses Anim, Member of Parliament (MP) for Trobu Amasaman on the side of the Minority New Patriotic Party (NPP), complained about the delay of releases to the sector, and said it was affecting the delivery of quality education.

He complained about the high number of untrained teachers, which had been taken up by national service persons who are not professional teachers.

He challenged the Minister of Education to work on providing trained teachers to the schools, especially those in the remote areas.
On the agricultural sector, Mr Gabriel Kodwo Essilfie, the Chairman of the Select Committee on Food Agriculture and Cocoa Affairs, called on Ghanaians to move away from calculating the per capita debt by dividing the total national debt stock by the national population.

He said this was because other variables must be taken into account, a remark to which Mr Ignatius Baafour Awuah, Deputy Minority Chief Whip and MP for Sunyani West, on a point of order indicated that, that was the standard practice.

While Mr Essilfie maintained that there had been progress in the agriculture sector, Dr Owusu Afriyie Akoto, Ranking Member of Agriculture and Cocoa Affairs, painted a downward trend in the performance of the cocoa sector.

He said there has been a constant decline in Government resource allocation to the agricultural and the cocoa sectors, where Government had failed farmers with unfulfilled promises, resulting in lower food productivity, falling levels of fish catches.

Mr Essilfie, however, countered the subsuming of low marine fish catches that the Government was making for the shortfall through the development of and investment in aquaculture.

Dr Akoto complained about the unavailability of premix fuel for fishers, noting that “very little mention was made of pre-mix fuel” in the budget.

Dr Akoto noted that the cocoa sector was collapsing, and Ghana, which had a similar coverage area for cocoa production as neighbouring La Cote d’Ivoire, currently had to import cocoa beans from that country to feed its cocoa and allied factories.

“The bad policies and corruption in the cocoa sector are still with us today,” Dr Akoto said.
GNA