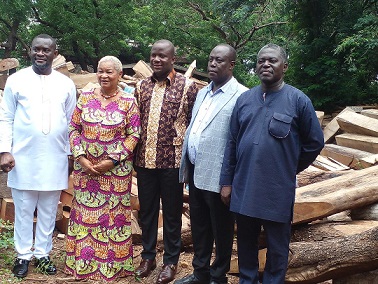 Government through the Ministry of Lands and Natural Resources, Friday symbolically handed over all the 18 containers of seized Rosewood to the Board of Trustees of the National Cathedral of Ghana.

The donation is in fulfilment of the pledge the Sector Minister, Mr Samuel Abu Jinapor made at the Tema Port a few weeks ago when he took delivery of some seized rosewood.

He re-affirmed Government’s commitment to halt the Cartel behind the harvesting and exportation of Rosewood, in order to preserve the country’s forest cover.

The Minister also reiterated government’s resolve to stop rosewood syndicates in the West African sub-region from using Ghana as a transit point for exportation of the commodity.

Mr Jinapor said his Ministry would be transparent and exhibit high level of integrity with the national resources under its watch, including seized rosewood.

On behalf of the Board of Trustees of the National Cathedral of Ghana, Reverend Professor Paul Frimpong-Manso, General Superintendent of the Assemblies of God, Ghana, and Dr Joyce Rosaline Aryee, Founder of Salt and Light Ministries, who are both members of the Trustee, thanked the Government for graciously donating the rosewood towards the construction of the Cathedral.

They were of the belief that anyone that supported the construction of the cathedral through cash or kind would receive God’s blessings and not a waste of his or her resources.

President Nana Addo Dankwa Akufo-Addo has said that, if things worked out as planned, the National Cathedral would be commissioned on March 6,2024.

The President said Ghana, being deeply religious people, the Cathedral will provide a historic opportunity to put God at the centre of the nation’s affairs, and served as a symbol of our eternal and continuing gratitude to God.

The National Cathedral will serve as a national inter-dominational facility for prayer and worship.

It will also be a centre of learning and a national point of convergence.