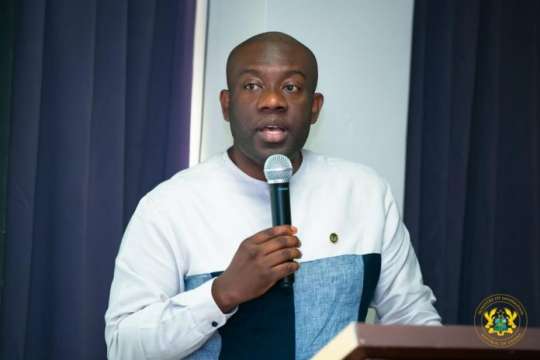 Two Italians who entered Ghana on board Air France flight last night, have been repatriated in compliance with the travel advisory directive issued by the Government to combat the spread of COVID-19.

The Minister said the nation was at war with the Coronavirus pandemic and government would do everything possible to prevent community spread of the flu-like disease.

Government on Sunday, March 15 issued a travel advisory directive, announcing that travelers who travelled to countries that had recorded 200 or more COVID-19 cases would not be allowed into the Ghanaian jurisdiction.

Additionally, airlines were instructed not to allow such persons into the country’s jurisdiction, except Ghanaians returning from a trip abroad.

Currently, Italy is one of the worst affected countries in the world recording over 25,000 cases of COVID-19, with more than 1,800 deaths.

Therefore, governments around the world have stepped up restrictions on the movement of their citizens and preventing nationals from countries that are worst affected by the global pandemic from entering their jurisdictions in the quest to prevent the spread of the virus.

Mr Oppong Nkrumah said the government, through the Ghana Health Service and Risk Communication and Social Mobilisation Team and other partners had put in place stringent measures to help protect Ghanaians and prevent community spread of the disease.

“We’re praying and hoping that in the next two weeks, the about 200 contacts of the six COVID-19 cases do not show signs and symptoms of the virus so that we can contain it.

“In fact, last night, we had reasons to return two Italians who came here through Air France flight because we’re getting very strong about the directive and to ensure that importation ceases and prevent community spread,” Mr Oppong Nkrumah stated.

The Minister said for the nation to prevent the spread of the virus, it was imperative to intensify public education on the disease by dispelling false information being peddled by rumour mongers.

He stressed that after the Regional Information Officers were properly briefed about the dos and don’ts and other relevant information on the disease, it was incumbent upon them to re-train the district information officers, announcers, van operators and other staff within the information dissemination chain of the ISD so that they would subsequently educate the public to prevent the spread of the disease.

The Minister stated that the GHS had developed education materials on COVID-19 including; flyers and posters and would be made available to the information officers to educate the people on the right messages on the disease.

In addition, the ministries of Education, Food and Agriculture and Local Government and Rural Development were collaborating with the Information Ministry and the Risk Communication Team to ensure that in places that there was no ISD vans, those ministries would release their education vans and other logistics to them to support the national education campaign.

“In my view, we’re at war as a country against this virus and we must all come onboard to spread the message.
“It is not the time to engage in turf war and say this and that has done that, but we must all rally together to support the leadership the President has shown and the work the health authorities are doing and make sure we get the message on the ground to stop the spread of the virus,” the Minister advised.

Ghana government has earmarked $100 million for preparedness and response plan, which would be used for infrastructure, purchasing of materials and supplies as well as for public education.

So far, seven cases of the deadly COVID-19 have been confirmed in Ghana as of March 17 after testing nearly 100 suspected cases.