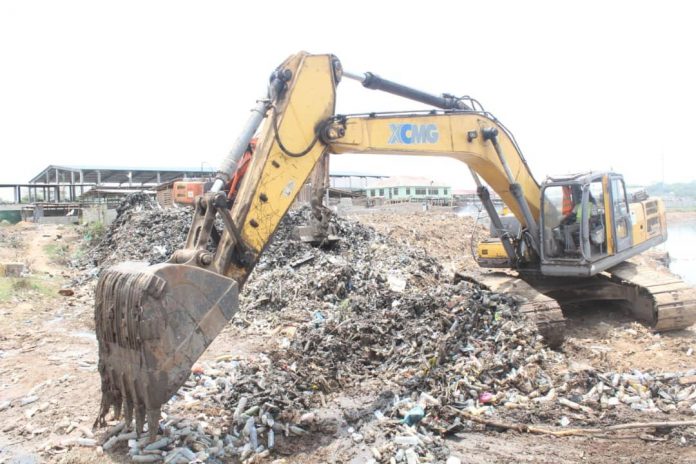 Government has spent GHS 230 million in the past four years in providing proper drainage systems across the country towards addressing the perennial flooding in some parts of the country.

Mr Francis Asenso-Boakye, Minister for Works and Housing, who disclosed this in Accra after touring some major drainage projects in some flood-prone areas on Tuesday, said government, remained committed to providing more resources to the sector to address the menace.

“Government has committed a lot of resource especially within the Nana Akufo-Addo’s administration. Within the last four years, on drainage provisions alone, government has spent GHS 230 million and you saw the dredging work at Odawna that is being done by Dredge Masters. In fact, I’m amazed at the work done so far.

“This annual dredging has helped the country prevent another major flooding. Government will continue to commit resources towards addressing the issue of flooding,” the Minister said.

The tour was to enable the Minister to appraise projects under the Ministry to make informed decisions.

At the Accra Sanitary, Sewerage, Storm water Drainage Alleviation Project (AS3DAP) which involves the dredging of the Odaw River and Korle Lagoon, Mr Sena Adiepena, Operations Manager of Dredge Masters, the Company tasked to desilt the Korle Lagoon, said it was currently in the third phase of the project, adding that 60 per cent of work had been completed.

He said the presence of squatters at the banks of the lagoon was, however, impeding the smooth implementation of the project and called on city authorities to as a matter of urgency move in to address the situation.

Mr Adiepena was optimistic that the country would not witness any form of flooding this year, particularly in and around the lagoon with the onset of rains.

“Going into the rainy season, per the work currently ongoing and what we want to achieve we don’t foresee any flooding except in the case of abnormal rainfall. Even though the metrological office has advised that we are likely to experience rainfall, the extreme we cannot tell but for minimum to average rainfall we believe that we will not have flooding issue because of our presence on the ground and the continuous dredging,” he said.

At the Santa Maria, Mallam, Apenkwa Drainage Projects, Mr Seth Kudzordzi, Head of Drainage Engineering, Hydrological Services Department, said works on the three projects had so far been successful and has helped curbed the recurrence of flooding in the beneficial areas.

He, however, said that the presence of a building close to the edge of the project stalled the progress of work at the Santa Maria Drainage Project and appealed to the Minister and the Assembly to assist the Department resolve the issue for work to commence.

Government, since the June 3, 2015 flood and fire disaster, which claimed more than 150 lives and caused damage to properties, had implemented a number of measures including the annual dredging and desilting of major drains in the country, especially across the capital to forestall similar disasters.

Mr Asenso-Boakye commended Dredge Masters for the quality of work done so far and appealed to Ghanaians to be more responsible in the management and disposal of waste to complement government’s efforts in averting recurrence of such disasters.

“Government alone cannot address the issue of flooding if as a country, we as citizens don’t conduct ourselves in a responsible manner. I, therefore, urge our colleague citizens and Ghanaians to be more responsible in the disposal of solid waste,” the Minister said.

He called on the District Assemblies to strictly enforce the various planning laws and building codes to address some of the concerns.