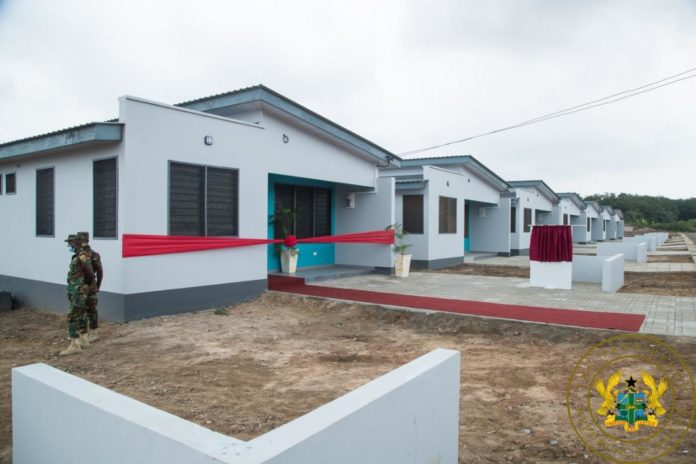 Dr (Mrs) Freda Prempeh, Minister of State in-charge of Works and Housing at the weekend reaffirmed government’s commitment to bridge the housing gab in the country under the affordable housing project.

She indicated that the government intended to construct between 100,000 to 250,000 housing units every year to provide affordable residential accommodation for public and civil servants.

Dr (Mrs) Prempeh, also the Member of Parliament (MP) for Tano North Constituency in the Ahafo Region, said this when she and a delegation from the State Housing Company (SHC) inspected acres of lands secured by the SHC to start the affordable housing project in the Ahafo Region.

Located at Duayaw-Nkwanta (100 acres), Yamfo (100 acres) and Tanoso (50 acres), the chiefs and people of the three towns released the lands to the government four years ago for the affordable housing project.

Dr (Mrs) Prempeh and the delegation paid courtesy calls on the Yamfo and Duayaw-Nkwanta Traditional Councils to interact with the chiefs and finalise documentations on the lands.

To address the country’s two million housing deficit, the Minister explained that the government had decentralised the affordable housing scheme to Metropolitan, Municipal and District Assembles across the country.

Dr (Mrs) Prempeh indicated the SHC has already started undertaking a rural housing scheme, but expressed regret that land litigations had delayed implementation of the scheme in parts of the country.

On his part, Mr Nicol explained the housing project would create opportunities for middle and lower income earners, particularly in the public sector to acquire their own houses saying, the SHC had designed affordable payment plans for interested workers.

He expressed appreciation to the Chiefs and people of the area for providing the lands, and assured that the housing project would commence by the close of the year.

Nana Boakye Tromo III, the Paramount Chief of Duayaw-Nkwanta Traditional Area lauded the affordable housing project, and called on the government to make it a reality.