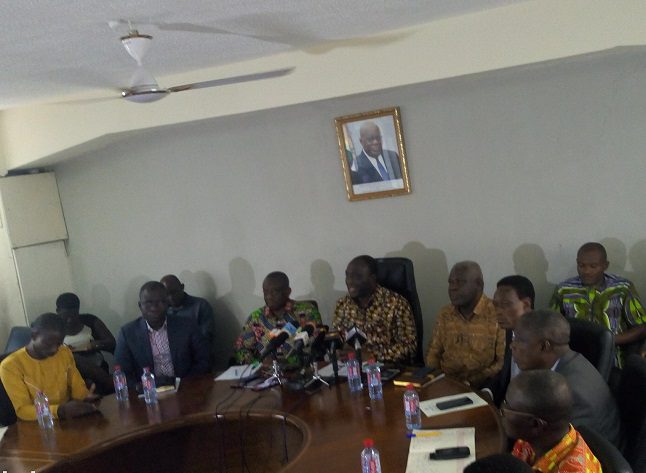 The Ministry of Trade and Industry in collaboration with the Finance Ministry and the Industrial and Commercial Workers Union, have joined forces to introduce the government’s tax stamps policy by 1st June, 2018.

According to the Minister of Trade and Industry, Alan Kyeremanteng, the parties have agreed that the Ministry of Finance should start the implementation of the tax stamp policy on textile materials by September 2018.

Speaking to the media in a joint press conference after the engagement, Mr. Kyeremanteng charged the Finance Ministry to begin to engage all the stakeholders in the textile industry by 1st June, 2018 for the introduction of the tax stamp policy.

He said “We have agreed among ourselves that, beginning June, the Ministry of Finance will begin with an engagement with all industry players on the introduction of this tax stamps.

Every piece of cloth will have a tax Stamp from the ministry of finance and clearly, this will help us to monitor those selling pirated or counterfeit textile materials in the market.”

The Minister again emphasized that, they have agreed on some measures like the imposition of import restriction on textile materials and among others, to end the influx of pirated textiles into the country.

He explained that, this import restriction is going to be managed by government and the industry players themselves.

According to him, “The current demand for textile prints in our country is about 120m yards per annum. The combined production does not exceed 35m yards per annum, so you can see the gap between the demand and the supply. So it is not in the interest of government to ban import, because it clearly shows that there is a significant demand of textile Wear in the country.”

He also indicated government’s commitment to provide stimulus support for the textile companies to boost their production.

He also assured that, government was going to use the public procurement process to ensure that uniforms for state institutions and students in the basic schools are printed by the local manufacturers, which would in turn to help boost the capacity of the manufacturing companies to employ more people.

The General Secretary of the Industrial and Commercial Workers Union (ICU), Solomon Kotei, said Ghana’s textile industry which used to employ over 25,000 people has seen a decline in sales and production for decades, leading to massive lay off of workers due challenges bedevilled the industry.

He mentioned that, out of the over 30 Ghanaian textile companies that existed only four are surviving employing a little over 2,000 workers as it nears total collapse.

“We believe with these steps that government has taken, we are going to see greener pastures again in this companies, not only in GTP, but we see that also for Bold Textile, a company that rely heavily on GTP, the survival of GTP will also give them a lot of hope to look into the future.

We also want to use this opportunity to encourage all those who are stakeholders in this particular industry, that this is not going to be a one stop solution, any further ideas that we all have to actually help to change the fortunes of this industry is actually welcome.” Mr. Kotei reiterated.