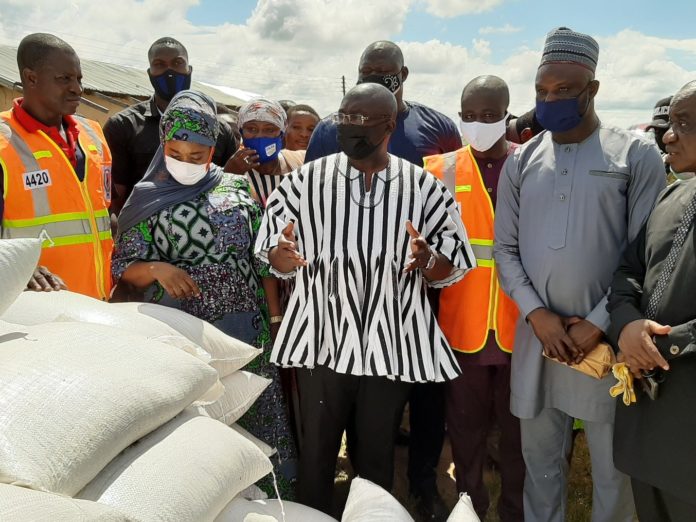 Recent floods in the Region has rendered many residents in the area homeless, a total of 938 persons were affected in four communities, Banawa, Kata, Gaagbini and Dimia.

A total of 80 households were destroyed, 58 houses collapsed, with a total of 384 rooms destroyed in the four communities.

Addressing the flood victims at Banawa, a community in the North East Region, Dr Bawumia said “By the grace of God, once the rains stop, we will support you with houses again, and we pray for the rains to stop and those houses will be structured in a better way to withstand future flooding.”

The Vice President as part of his visit, to some of the flood areas, also presented a cash donation of GHC 100,000.00 to assist purchase more relief and food items to supplement the mattresses, buckets, cartons of milk, bags of maize, rice and sugar among others that the National Disaster Management Organisation (NADMO) had provided.

He said the flood situation in the area had compelled him to suspend his campaign, “I have rushed home to see for myself what has happened,” and noted that the flood waters had caused the collapse of many buildings.

“Unfortunately, many of these buildings were built with mud and so the force of the water has resulted in the collapse of many of them. We have estimated about 80 houses but they are more,” the Vice President said.
He commended NADMO for acting swiftly to assist the victims in the Region.