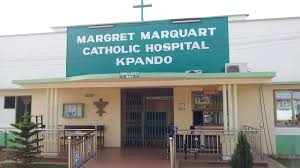 Mr Emmanuel Hanson Torde, Administrator, Margret Maquart Hospital in Kpando, has called on government to attach the National Ambulance Service to hospitals in the country.

He said the approach would allow easy access to the Service without having to contact them via telephone.
In an interview with the Ghana News Agency (GNA), Mr Torde said, “sometimes when contacting the Service for emergency cases, it is either there is no response or the line doesn’t go through”.

He said the Hospital has been without its ambulance for the past four days since it was sent for repairs after a break down and their inability to access the National Ambulance Services compels them to call for one from the Abor Catholic Hospital.

Mr Torde said it took about three hours before the ambulance from Abor gets to Kpando and that he feared for the lives of patients on admission who needed emergency assistance.

He said the Hospital is in dire need of an extra ambulance to augment the one they have as it served the entire Municipality.