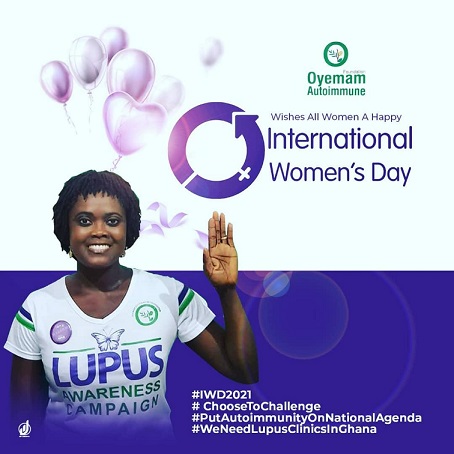 The Oyemam Autoimmune Foundation has called on government to support lupus patients in Ghana by making treatment visible and accessible.

It also called for the establishment of a national autoimmune commission to address all autoimmune related issues in the country.

Lupus is a chronic autoimmune disease, which causes a person’s immune system to fight his or her own healthy tissues and organs.

It has no cure and patients must be on medications to keep it controlled.

About 90 per cent of people who suffer lupus are women aged between 15 – 44 years.

In a statement to mark the World Lupus Day, Mrs Emma Danso, the Executive Director of Oyemam Autoimmune Foundation, said lupus was common in Ghana but due to low awareness and misconceptions, it was usually thought to be something else.

She said it often led to some patients suffering for long periods before getting a diagnosis, which often resulted in misdiagnosis and wrong treatment; stigmatisation; and loss of employment, among others.

“The notion that lupus is a foreign disease is only a myth. Every week, new Ghanaian patients are diagnosed of lupus in the country,” Mrs Danso said.

She said most of the patients were women within their childbearing years serving Ghana productively in different fields of endeavour but the disease interfered and altered their lives.

She said undiagnosed women who should be receiving special attention during their pre-natal period were often missed and later suffered from pregnancy complications, which sometimes resulted in loss of lives.

“The extent to which lupus impacts a person’s life greatly depends on early and accurate diagnosis, effective treatment, appropriate lifestyle adjustments and support,” she said.

It was estimated that each month, a lupus patient whose disease activity was relatively well controlled spent at least Ghc500 on medications alone, she said.

However, for a patient with active disease activity, monthly medication expenses could be as high as Ghc6000, excluding consultation fees, cost of laboratory tests, nutritional needs as well as utilities, which made life difficult, Mrs Danso said.

“It is a terrible state to be in when a patient has to choose between medications and other essential needs to live normally like everyone else. Coupled with all the other complexities of lupus, many patients tend to suffer from anxiety, panic attacks, depression and other mental health challenges,” she said.

“Currently, I spend about 1,500 Ghana Cedis monthly on my medications whereas in the past I was spending 6,000 Ghana Cedis. We are pleading with the National Health Insurance Scheme to cover lupus medications to ease the burden of patients and their families.”

Mrs Danso said though there were many autoimmune diseases, lupus was a prototype and could cause patients to suffer from other types.

“I have suffered from multiple autoimmune diseases because of lupus. Likewise, there are many untold stories of lupus patients across our nation,” she added.