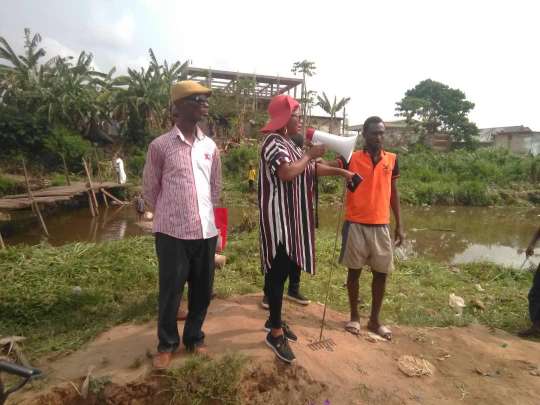 Government has approved an amount of GHc24 million for repackaging and re-awarding of Swedru Akora River dredging Project after it was stalled for more than five years.

The approval of that colossal amount of money will help ease the huge traffic jam that hit Swedru town, particularly on market days on Mondays and Thursdays.

Mrs Cynthia Mamle Morrison, Minister of Gender, Children and Social Protection and MP for Agona West made this known when she joined a five-hour clean-up exercise at the banks of Akora River.

The exercise, organised by Concerned Youth of Agona Swedru saw the people weeding and collecting huge plastic bottles and sachet water bags piled-up alongside the river.

According to the MP, the Contractor would move to site to commence work before the end of March.
Mrs Morrison said apart from dredging of the river, three more steel bridges were added to the contract to be constructed at Desuenem/Owani/ Mangoase to join Old Sawmills.

Another one will be constructed at Swedru Post Office to Pentecost Prayer Centre to join Nkubem bye-pass road and Swedru Zabo Zongo to Swedru Mahodwe.

The Gender Minister said the contact would also cover Woraba Estate and Swedru Mangoase roads and other parts of Swedru Township.

Additionally, talks are on-going with roads and Highways Ministry to include the roads at Mahodwe community, which were not originally in the contract.

She said the construction of asphalt roads were started at Swedru town and expressed the hope that the contractor completed on schedule to enable Swedru to become beautiful and vibrant.

The Minister stated that the Akora River banks would be used as recreational centre, where holiday makers could go instead of travelling all the way to Winneba and Kokrobite in Accra and other beaches for fun.

The MP debunked rumours being peddled in the Swedru township and the rest of the Constituency that she threatened to arrest anyone who would reconstruct the wooden bridge swept away by torrential rains last October.

According to Mrs Morrison, the demonstration staged by the Concerned Youth of Swedru as a result was their legitimate right.

She expressed satisfaction that the asphalt road works in Swedru Texaco to Swedru Government Hospital –Mortuary, Junction which began recently would soon be completed and appealed to the residents to cooperate.

She said the Nyakrom roads were constructed and tarred to facilitate transportation of goods and services in the area.

The Minister said the government had kept faith with of the people of Agona West and the entire nation as well, adding that everything possible would be done to ensure that the national cake was equally distributed to ensure quality living for Ghanaians.