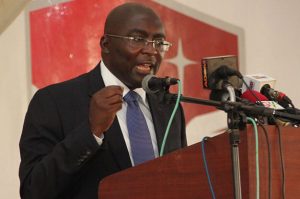 That decision by the government, he said, was against the backdrop that about 90 per cent of corruption within the public sector was procurement-related.

“One can hazard a guess that maybe 90 per cent of corruption that we have is related to public procurement because of its very nature. This is why the President, in his wisdom, has recognised that we need to pay particular attention to this particular issue,” he stressed.

Vice-President Bawumia said this in Accra Monday when he opened a six-day special training on the Financial Management Law, as well as the Procurement Law and processes for ministers of state, deputy ministers, chief directors, heads of key state agencies and other political appointees.

He said public procurement occupied a large percentage of government business and was one of the nerve centres in the process of translating national budgets into goods, works and services to meet national development outcomes.

Dr Bawumia explained that the President appointed a minister of state to work alongside the Public Procurement Authority (PPA) so that the Presidency would have an insight into what was going on in public procurement.

The two acts, he stressed, were key to improving economic fortunes. He told the participants that understanding and implementing them were critical to the government maintaining and sustaining fiscal discipline.

In view of that, he said, the policy thrust of the 2017 budget gave an indication of how the government intended to strictly enforce the anti-corruption agenda through effective fiscal discipline and the enforcement of all the aspects of the Public Financial Management Act and the Public Procurement Act.

Over the years, the Vice-President said, Ghanaians had been witnesses to how fiscal governance had been carried out without the expected discipline and dedication for good outcomes.

“We have heard and seen incidences of the abuse of the procurement processes, especially the over-reliance on the infamous sole-sourcing approach,” he said.

Sole-sourcing, he said, was legal but there were circumstances under which it was necessary, adding: “It should not be abused.”

Dr Bawumia reminded the participants that, “At one point or another, you will be held accountable for an office that you held.”

The Minister in charge of Public Procurement, Ms Sarah Adwoa Safo, lauded the PPA and its stakeholders for the effort at ensuring that public procurement was based on value for money, efficiency, fairness and honesty.

The promulgation of Act 663, she said, was to sanitise government procurement processes and rid it of corruption and abuse.

However, she noted that policy remained the single most abused ever since its introduction.

She accused the Mahama-led administration of “taking undue advantage of sole-sourcing to loot state money”.

She said under the current administration, measures were being deployed to end the “wanton abuse of award of government contracts”.

Ms Safo said a list of all ongoing projects was being compiled by her outfit to advise the government on whether to proceed or abrogate those contracts.

Also ongoing were investigations into the procurement processes and procedures that each entity went through before being awarded, she said, adding that that was necessary to ascertain the level of compliance.

The Chief of Staff, Madam Frema Opare, said the training, organised by the PPA, in conjunction with the Office of the President, had been designed to furnish participants with knowledge of the Public Procurement Act and the Public Financial Management Act to enable them to deliver on their mandate to achieve value for money in all public procurement activities.

She said the training was also critical for them to avoid some of the mistakes of the past.