News Ghana
Home News Government’s Allocation For Goods And Services To The Education Sector Centered On... 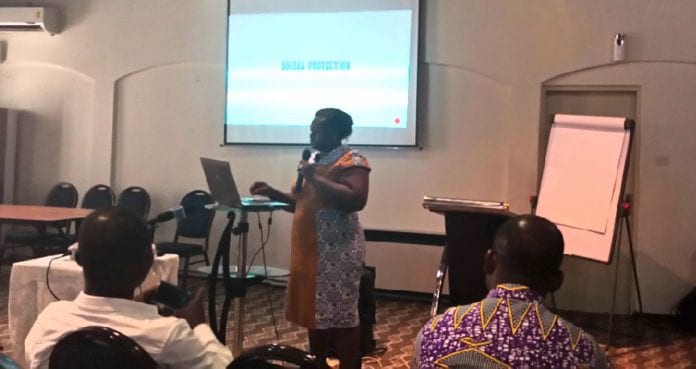 Mrs. Harriet Nuamah-Agyemang, Senior Programmes Officer at SEND Ghana has stated that government in the 2019 budget statement increased allocation for goods and services to the education sector to 25 per cent of the total allocation, but to the detriment of the other levels of education in the country.

SEND Ghana, she said was happy about the increment in the 2019 budget, but then their happiness was worth for just a short time because the amount between the educational levels was unevenly distributed. Explained that, government’s focus was centered on the Free Senior High School initiative in its allocations of goods and services.

She Indicating that, 88.8 per cent of the allocation would go to the Free SHS initiative, whereas only 11.2 per cent will be left for the other levels of education, include the pre-school, primary, Junior High School, non-formal special schools and tertiary.

She however, bemoaned that if one level out of the lot takes 88.8 per cent, leaving just 11.2 per cent for the running of those institutions as well as for teaching and learning, then it’s not fair enough.

Mrs. Agyeman revealed again that, an analysis of the Controller and Accountant General’s report for 2016 and 2017 indicated that only a small per cent of the amount allocated was actually released, though the allocation for compensations are usually released and sometimes overrun.

Mrs. Harriet Nuamah Agyeman, made the revelation in a presentation at a forum in Accra on the 2019 Budget Statement and Economic Policy, on Tuesday 4th December, 2018, at Cleaver House Hotel.

On the LEAP, she indicated that, the provisions made for social protection in the 2019 budget for beneficiaries of the Livelihoods Empowerment Against Poverty (LEAP) programme, which is currently GH¢64.00 every two months per household was way below international standards of GH¢5.00 per day.

She therefore called on government to increase the amount of cash transfer per household.

The Deputy Country Director of SEND Ghana, Dr Emmanuel Ayifah, indicated in his presentation that, the 2019 budget statement failed to provide details on targets achieved on key child protection policies in 2018 and targets for 2019. This, he said, made it difficult to track and hold government accountable for the use of public resources meant for child protection.

Dr. Ayifah said, the establishment of community development will build the capacity of 1,000 social workforce in child and family welfare for child protection programmes.

He however lauded government for the introduction of the National Action Plan on ending Human Trafficking being implemented with the construction of four shelters for rehabilitating rescued victims of trafficking children.

On Agriculture, he revealed that, successive governments have failed to meet the Comprehensive Africa Agriculture Development Programme obligations and rather invested less than 10 per cent of its annual expenditure in Agriculture.

Explaining that, their analysis showed that, 51.2 per cent of the Ministry’s projected expenditures in 2019 were set to be sourced from donors.

He said, allocation for goods and services to the Ministry of Food and Agriculture was declined by 6.7 per cent according to the 2019 budget, and the decline poses a potential threat to the implementation of new initiatives, and the government risks its target of having one million farmer beneficiaries.

On tax, Dr. Ayifrah said, the introduction of the personal income tax band rate exceeding GHC10, 000.00 at a rate of 35 per cent in 2018 mid-year budget review was seen as a key revenue enhancing measure. Indicating that, the 2018 performance indicators, showed that personal tax revenue projection out-turn recorded a 0.6 per cent increase over the revised budget figure.

However, he said it’s unfortunate situation that the 2019 budget proposal to review the income tax band to exceed GHC20,000.00 at a lower rate of 30 per cent will adversely affect revenue generation due to the lower number of Ghanaians in the high income bracket.

On her part, the National Coordinator for Civil Society Organisation Platform on Sustainable Development Goals, Mrs. Ugonna Ukaigwe, also noted that in spite of the 2019 budget statement showing government’s commitment to the SDGs, there wasn’t any clear policy direction in the budget on how government would enforce inclusivity in compliance with the principle of ‘leaving no one behind’.

She however, urged the government to develop, an inclusive objective that clearly itemizes government’s vision for ‘leaving no one behind’ as part of its commitment to the SDGs.