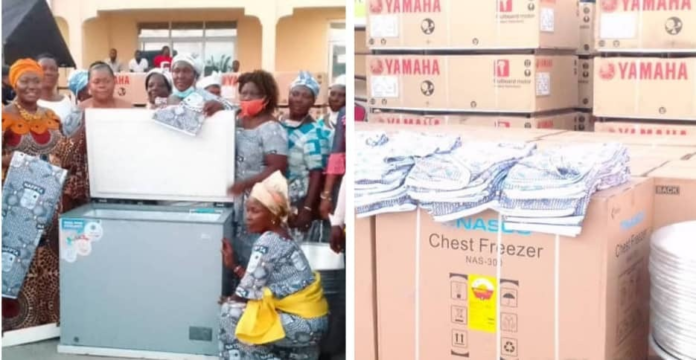 Mrs Elizabeth Afoley Quaye, Minister, Fisheries and Aquaculture Development says the government has and continues to show commitment to the welfare of millions of fishers and their dependents across the country.

She said the government had supported fishers in areas such as social, economic, and infrastructural investments particularly in the marine sector aimed at boosting their productivity and by extension, improving their living standards.

Mrs Afoley Quaye said this at Anloga when she distributed subsidised outboard motors, chest freezers, aluminum basins, and cloths to fishers in the three coastal communities of Ketu South, Keta, and Anloga Districts.

The distribution, the second of its kind in a spate of about one month brought to the total, 50 per cent-subsidised outboard motors to fishers along the coast to 300, 190 aluminum basins, 60 chest freezers in addition to 30 full pieces of National Fish Processors and Traders Association (NAFPTA) cloth.

The Minister earlier presented 20 chest freezers to women at Mepe, an inland fishing community in the North Tongu District.

The Member of Parliament (MP) for Krowor Constituency in the Greater Accra Region said the government was willing to do more to support the livelihoods of people in fishing dependent communities and called on them to vote massively to retain the government in power.

“Government has already demonstrated its commitments to fishers in diverse ways and it’s determined to do more. We’re appealing to you in the Volta Region, my mother’s region to vote massively for our party, the New Patriotic Party (NPP). Volta Region needs NPP MPs for change.”

Rev Johnson Avuletey, Deputy Volta Regional Minister called on fishers to help retain the hardworking sector Minister by voting for Nana Akufo-Addo and the NPP saying, “that’s the only way to say thank you to her for her good works since you’re not in her constituency to vote for her.”

Mr Seth Yormewu, District Chief Executive for Anloga was grateful to the government for the interventions to his people saying, “this gesture indeed shows that this government is committed to distributing the national cake to the benefits of all citizens in the country.”