The Youths for Human Rights Protection and Transparency Initiative (YARPTI) is sad to note that In the midst of abundant human and natural resources, the vast majority of Imo working masses and the youths live in abject poverty. It is no secret to us that the politician responsible for this embarrassing state of absurdity in Imo State is the ?profit first? capitalist anti-poor, anti-peoples Governor of Imo State Chief Rochas Okorocha. 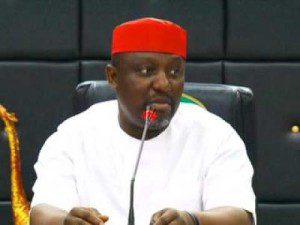 YARPTI is sad that despite enormous human and material potentials, Imolites? crisis of poverty in the midst of plenty continues apace. Vicious attacks on living conditions, wages and social services have reduced the mass majority to a state of perpetual misery. According to statistics, about 70% of Ndi-Imo exists on less than one dollar per day. The capitalist anti-poor, anti-peoples Governor of Imo State (Owelle Rochas ) continues to loot the collective wealth of Imo without remorse.

YARPTI is calling on the Imo House of Assembly to impeach the Governor of Imo State immediately for financial recklessness and profligacy as well as abuse of executive powers which has made him unfit to serve as the number 1 citizen of the state. We are not motivated by malice, spite, pecuniary interest or promise thereof, nor are we propelled by any desire for public office.

Since his election as Governor , Okorocha has embarked on a mission to undermine the Constitution of Nigeria while attacking the freedom and liberties of the people of Imo State. The evidence of Okorocha?s financial recklessness, profligacy and anti poor policies are impossible to ignore. So we are demanding that the duly elected members of the Imo House of Assembly should take immediate action to remove him from office in order to prevent him from doing further harm to Imo with the following reasons: