A Court action has been brought against the government of Ghana by some seven Ghanaian citizens over the controversial Ghc3.6 million spent on re-branding 116 Bus Rapid Transit Buses (BRT). 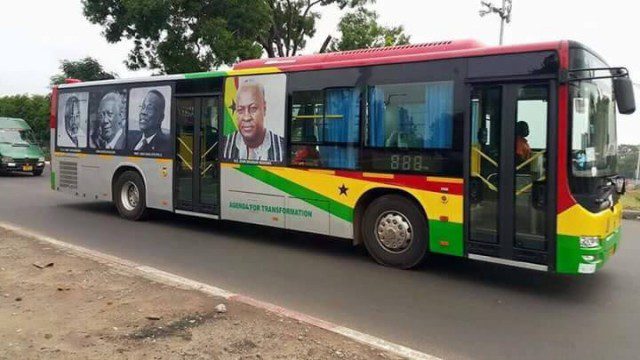 The Minister of Transport Dzifa Attivor, and the Attorney General and Minister of Justice, Marietta Brew Appiah-Oppong, are the first and second respondents respectively in the said suit, a copy in possession of Newsghana.com.gh.

The Plaintiffs are praying the High Court, Human Rights Division, to issue “an order directing the Honourable Minister of Transport to make full disclosure on the contract for the branding of the 116 Bus Rapid Transit (BRT) buses.”

Francis Kennedy Ocloo and six others who are the Plaintiffs want the court to order the Ministers to make available to them, the full contract for the re-branding of the buses.

The court action comes after the Chief of Staff ordered an investigation into the contract following the backlash that government received from the public.

Majority of Ghanaians have expressed anger at Government’s decision to spend a whopping GHC 3.6 million on re-branding the buses.

It has been reported that stickers on each bus cost Ghc11, 000. The pro-forma invoice dated 17th July 2015, and signed by the Accounts Officer of Smarttys Management and Productions and copied to the Ministry of Transport, put the total cost of branding for each bus at Ghc30,420.00.

Government is also accused of misplaced priority considering that the state could have raked in nearly Ghc5 million cedis a month if it had given out the spaces on the 116 buses for commercial advertisement.

See the suit below: