Government has released an amount of GHC35 million to pay arrears owed trainee nurses across the country according to the Deputy Minister of Information, Pius Enam Hadzide.
This comes on the back of mounting pressure on the Ministry of Health to pay arrears of nursing trainee allowances.

Speaking in an interview, the Deputy Minister of Information said the Controller and Accountant General has releas 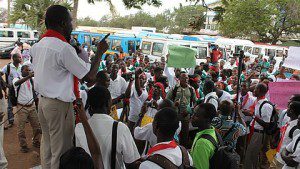 ed GHC35 million out of the almost GHC60 million that is spent quarterly on the payment of trainee allowances.

He assured that the outstanding GHC 25 million will be released in due course, explaining further that all final year students will be paid the three months arrears i.e. April, May and June whereas trainee nurses currently pursuing their programmes will receive one (1) month arrears with outstanding two months to be cleared shortly.

“I expect that by next week trainees would be smiling to the banks or wherever to receive their allowances. I am impressed with their candor and I ask them to remain calm as government is moving at jet speed to resolve all challenges and to get Ghana working again after several years of mismanagement “ Hadzide said.

The Deputy Minister added that processes are far advanced for new trainees admitted into training schools recently to receive their allowances in due course.

The Akufo-Addo government in a run-up to the 2016 Presidential elections promised to restore the teacher and nurses trainee allowances scrapped by the previous government; a promise that was fulfilled in September 2017.

Government in an attempt to resolve the delay and prevent further agitations among the trainees has directed that the allowance be migrated from the statutory payments to the salaries and emoluments.

This will ensure that the allowances will now be paid monthly through the Controller and Accountant General. This according to Mr. Hadzide when fully completed will put to rest the issue of delayed payment.

Nana Addo Dankwa Akufo-Addo upon assuming office in 2017, kept his promise and restored the allowances effective September 2017 to the joy of the trainee nurses who had complained about the hardships they faced without those funds.
Government is optimistic the migration of the allowances from statutory payments unto the salaries and emoluments payment will ensure uninterrupted training experience for the trainee nurses in the country.

We do not enjoy any allowances-Directors of Education