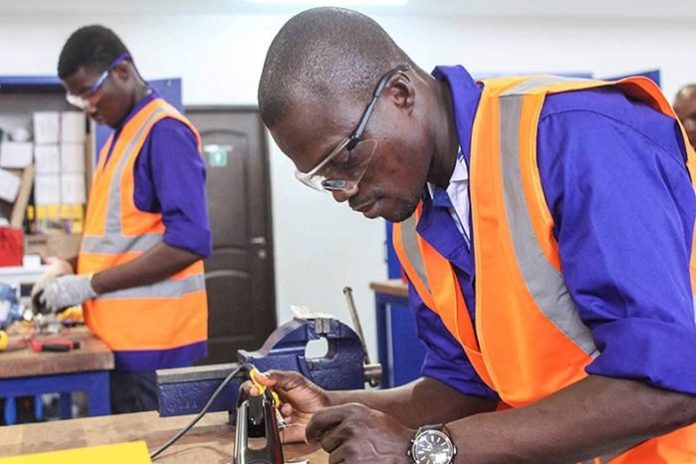 The move, he said, formed part of measures to increase the enrollment of students in TVET to produce the required manpower to accelerate national development.

Mr. Bonzo dropped the hint at a sod-cutting ceremony on behalf of the Ministry of Education as part of the expansion and retooling of the Charlotte Dolphyne Vocational Training Institute at Sanzule in the Western Region.

The one million-dollar project forms part of the Akufo-Addo-led government’s commitment to upgrade all the thirty-five (35) Technical, Vocational Education and Training (TVET) institutions in Ghana.

At a colourful ground-breaking ceremony at the forecourt of the school, Mr Bonzoh thanked the school authorities, students and residents for supporting the project and for promoting vocational education in the District.

Mr Bonzoh noted that the school lacked infrastructural development and therefore commended the government for listening to the appeal of the people to upgrade the school.

He said the government would also provide a 33-seater bus to the school and train the teachers to meet the current trends of TVET.

He said the government would introduce oil and gas courses in the school to provide skills to the students to benefit the oil and gas industry.

On his part, the Manager of the Institute, Mr. Philimon Osei Sarfo, thanked the government for the project and said when completed, it would increase the current population of the school from 502 to about 1,500 by the year 2024.

He disclosed that the late Mr Kofi Dolphyne donated tools and equipment to start the institute and he paid all salaries for the then Manager of the institute until the National Vocational Training Institute (NVTI) absorbed the institute.

Mr Sarfo stated that the institute was focusing on lower and middle manpower training to equip the youth with employable skills through Information and Communication Technology (ICT), welding and fabrication, general electrical, block laying and concreting, dress-making and catering as programmes being offered.

He said, “The institute has churned out over 1,200 trainees who have been employed in all spheres of the economy”.

He commended the Ellembelle District Chief Executive for working so hard for the institute to benefit from the one million-dollar project.

The Ellembelle District Director of Education, Mr. Peter Ackah Blay expressed his gratitude to President Akufo-Addo for providing the institute with the infrastructural project.

“We are going to hand over this project to the teeming youth who are inching to get trained so that they can get employed in the industries that are coming to the Nzemaland,” he said.