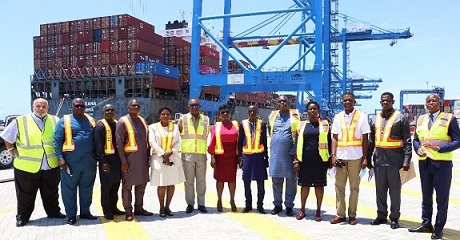 The Reconstituted Board of Directors of the Ghana Ports and Harbours Authority (GPHA) has paid a working visit to the Tema Ports and GPHA head office to acquaint themselves with its operations.

The Board led by its Chairman, Mr Isaac Osei, as part of the visit toured the Port of Tema, the Marine Section, Golden Jubilee Terminal, Reefer Terminal and the MPS Terminal three.

The Board members were also introduced to top management of the Port Authority and had an interactive session which included an orientation on the operations of GPHA, is financial status, updates on projects at the Ports of Tema, Takoradi and Keta.

Mr Osei said Ghana’s Ports were well positioned not only as the gateway to trade in the sub region, but also as a transit point for the landlocked countries.

He indicated that this was due to the fact that other countries preferred the services of Ghana’s Ports due to the availability of the requisite infrastructure and quality of service delivery.

He was hopeful that some equipment challenges at the Ports would be resolved, saying, as he gave the assurance that the Director General of GPHA was determined to ensure it happened.

The Board Chairman gave the assurance that he intended to bring his experience in both public and private sectors of the economy to bare on his leadership role as he led the GPHA Board.

He commended GPHA staff and management for their commitment and dedication to the work, noting that, they were qualified to undertake the mandate of the Port.

Mr Michael Luguje, GPHA Director General on his part said the Port Authority would continue to provide the needed infrastructure and business environment for trade facilitation and economic development.

Mr Luguje indicated that the growth in container traffic in 2020, and the first half of 2021 was a testament of confidence in Ghana’s economy, revealing that there was a joint effort from stakeholders to ensure that arbitrary charges at the Ports were scrapped.