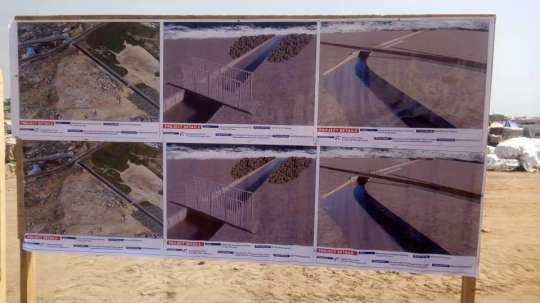 The Ghana Ports and Harbours Authority (GPHA) has cut sod for the reconstruction of the Trapezoid drainage system of the Chemu Lagoon at a cost of over 7.5 million Ghana Cedis.

The Chemu Lagoon which used to have a vibrant aquatic life and served as a source of livelihood for natives of Tema had over the years been reduced to a heavily polluted receptacle taking industrial waste and household garbage.

The dredging and the reconstruction project which would be wholly funded by GPHA would be executed by Hydronomics Limited in six months.

Mr Joseph Sarabina, Acting Manager, Engineering, GPHA, said the Authority embarked on a vigorous procurement and national tendering processes before selecting Hydronomics Limited, a Ghanaian Company, to reconstruct the drainage system, as well as dredge the lagoon to make way for uninterrupted flow of water, and provide a formidable drainage system that would help in the natural interactions of the estuary.

Mr Sarabina indicated that even though the GPHA had many demands and activities in which the funding could be channeled to, they found it prudent to dredge the Chemu to bring life back into it and give residents other livelihood alternatives.

It would serve a fundamental purpose for residents near the lagoon, he added.

He gave the assurance that engineers from the GPHA and the Tema Metropolitan Assembly (TMA) would supervise the project daily to ensure its completion within stupilated time.

Madam Joana Addah, Acting General Manager, Tema Fishing Harbour, in a welcoming address, said the deteriorating state of the Chemu lagoon had been a worry and concern to the fishing community since 1998 adding that it used to post a very beautiful scenery but had been desecrated by industrial and domestic waste.

Madam Addah stated that “after over 20 years of weeping, GPHA is now the saviour” that would breath life back into the lagoon.

Mr Daniel Nii Kwatei Titus Glover, Deputy Minister of Transport, on his part, indicated that government had resolved to protect and safeguard the ecosystem especially lagoons and rivers.

Mr Felix Mensah Nii Anang-La, Tema Metropolitan Chief Executive, commended the GPHA for the project and foresight, saying the state of the Chemu had been a worry to all stakeholders, reiterating the need for industries to treat their effluent before discharging into water bodies.

Mr Anang-La announced that his outfit and the Environmental Protection Agency (EPA) would prosecute such erring companies to deter others.

Relevance Of GNA Not In Doubt

NMC Propose Committee Of Enquiry To Look At GNA

GNA vows to give fair and accurate election reportage