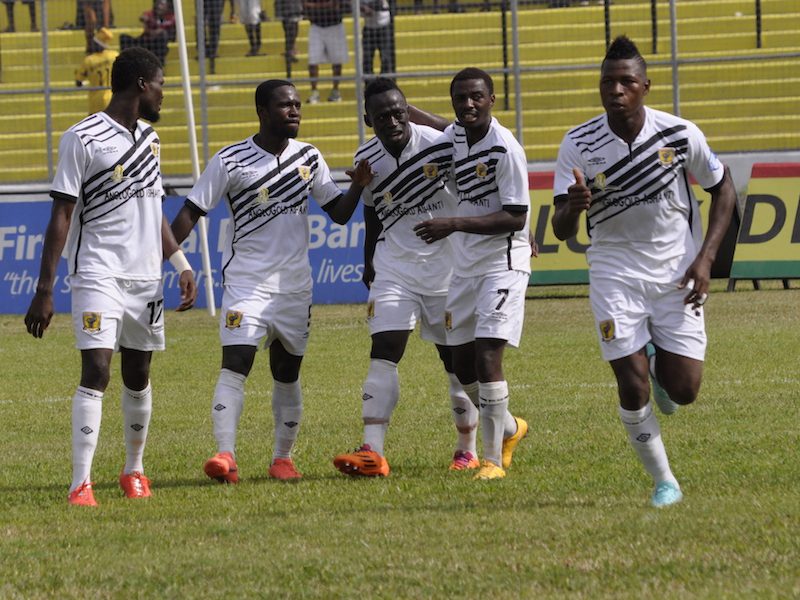 AshantiGold ended the first round of the Ghana Premier League as midway champions despite drawing 1-1 with Hearts of Oak at the Len Clay Stadium on Wednesday afternoon.

Ivorian international Didier Kore struck first for the Miners but midfielder Sabahn Laryea levelled for the Phobians at the death.

The Phobians went into the tie having their request for postponement of the clash denied by the Ghana Football Association and their recent poor form at the Len Clay Stadium.

While the Miners trekked back from the Upper West regional capital after playing Wa All Stars during the weekend.

Hearts coach Herbert Addo used the tie as rehearsals for their CAF Confederation Cup tie against Malian side AC Djoliba on Sunday as he paraded a full strength squad featuring Isaac Mensah, Eric Kumi and Gilbert Fiamenyo who all made the trip to the Ashanti region for the game.

Opening minutes of the tie saw flashes of brilliance from Hearts? attack but they failed to beat Fatau Dauda in the Miners goals.

Isaac Mensah and former Ghana U17 midfielder Eric Opoku were booked in the opening 24 minutes for Hearts and AshGold respectively.

While Hearts failed to make their early opportunities count, AshGold clinched the lead exactly on the half-hour mark through Ivorian defender Didier Kore.

The full-back artfully controlled a pass at the edge of the area before striking a neat drive which beat Abdoulaye Soulama in the Hearts goal.

Hearts made several attempts to salvage a point from the game but the Miners resisted and jealously protected their lead before home fans.

However just when they thought they scrapped all the three points, Laryea squeezed a point for the Phobians.