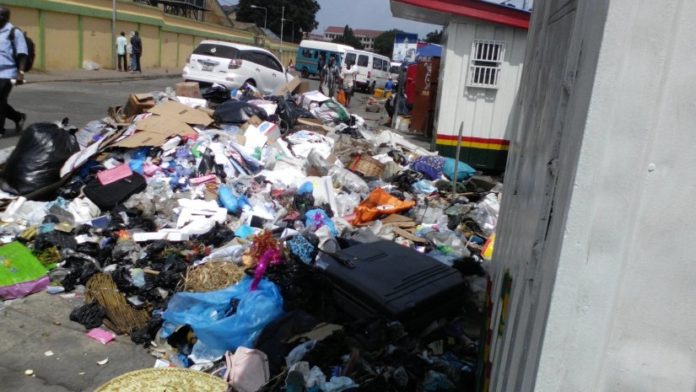 Ghana Private Road Transport Union (GPRTU) revenue collectors at Tema Station in Accra, says the lorry station is in a total mess as it is overwhelmed with piles of rubbish.

The heaps of garbage have been left for weeks, exposing the market women, passengers and buyers to perpetual health hazards.

Several commuters have decided not to patronise the lorry station due to the fear of contracting the COVID-19 and other illnesses such as malaria and cholera, they said.

Speaking to the Ghana News Agency in an interview about how dire the situation had become, Mr Asante Okala, a GPRTU Revenue Collector, at the new Tema station near National Lotteries, said people often honour their tax obligations yet the station is unkempt.

He explained that for the past two weeks, the station has remained untidy, even though people pay levies for the place to be cleaned.

The recent rainfall swept large quantities of debris into the open covets, choking them with stagnant water and refuse.

Food vendors in the vicinity complained about the stagnant water as it breeds mosquitoes and causes diseases and harm to public safety.

Madam Esther Kyerewa, a vegetable seller, attributed the unhygienic nature of the lorry park to commuters who dropped rubbish when on board vehicles.

A food vendor, who preferred to be identified as Memuna, said that most commuters refused to buy from them due to the poor state of the environment.