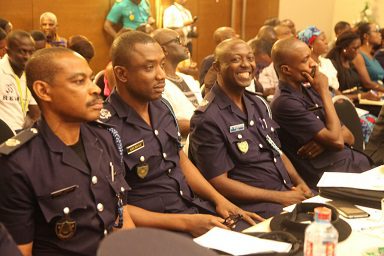 Ghana Revenue Authority (GRA) has marked the 63rd International Customs Day celebration in Accra with the focus on how customs administrations could promote partnerships with stakeholders to improve and expedite border processing. This year?s International Customs Day, which fell on Monday, January 26, heralds the launch of the World Customs Organisation Year of Coordinated Border Management (CBM) in which Customs administrations are encouraged to actively promote the partnerships they have built to improve and expedite border processing.

Under the slogan “Coordinated Border Management – An inclusive approach for connecting stakeholders,” the international Customs community is signalling its aspiration to further enhance its collaboration, cooperation and working relationships with its many partners.

The theme entails the coordination of practices that customs have implemented within their administrations, with other customs authorities, and with government agencies also operating at borders, as well as with economic operators involved in cross-border trade.

Speaking at the function, Mr Mark Woyongo, Minister of the Interior, said security of the country is a shared responsibility and called on the agencies operating at the borders to be vigilant and to effectively cooperate with each other to protect the country?s frontiers from international crimes and threats.

He said an integrated border management system that involves stakeholders would ensure that the threats are effectively dealt with at the borders.

Mr Woyongo lauded the joint initiative between the GRA and Ghana Immigration Service to ensure effective control of the borders.

She called for coordinated and effective service delivery to enhance revenue.

Mr George Blankson, Commissioner-General of GRA, said the day should be used to recognise the contributions of Customs officers working in extreme difficult situations in deprived border posts.

Mr Wallace Akondor, Acting Commissioner, Customs Division, who read a speech on behalf of Kunio Mikuriya, Secretary General of the WCO, said border agencies should work together for the common good despite varying regulatory mandates.

As part of the celebration, WCO certificates were presented to some institutions and customs officers who, last year, made sterling contributions to successful customs operations.

Use of uncustomed vehicles is illegal-GRA