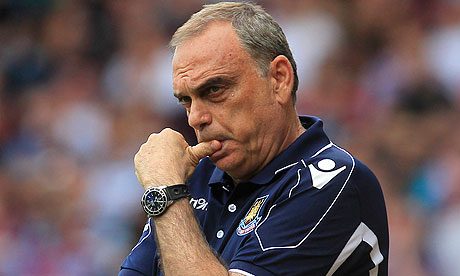 In Association football, the term tactical formation can be described simply as, the arrangement of players on the pitch from defence to the attacking third excluding the goalkeeper.
It must be noted that tactical formation is not static. That is, a coach can decide to alter his tactical layout several times within a game. A coach adopts a specific formation based on the availability of players at his disposal. On January 19, coach Avram Grant will test his tactical prowess for the first time on African soil as he leads the Ghana Black Stars to the 2015 AFCON with the hope of conquering the continent in Equatorial Guinea.
www.sports24gh.com has uncovered the tactical scripts that the Israeli would be employed in Equatorial Guinea and the writer in this article tries to break down the core mechanics of those tactics, explains why it works and to some extent provides examples of successful and grey areas in their uses.

The 3-5-2 tactical is a modern formation which employs two wing backs, five midfielders and two strikers. It must be emphasized that the right and the left midfield players in this system are invariably the wing backs and a lot of responsibilities are placed on these two because they have to defend when not in possession and provide quick pace and support in attack.
The central midfield requires skill, good first touch and vision for cutting passes. The epicenter in this formation is the classical no 10 who plays behind the two strikers whose role is to defend from the front in other to close and deny space for the opposition to operate from. This system provides a lot of opportunities for teams to score goals.

It must be noted that because of the increasing pace of modern football, it has become almost impossible for teams to find wing backs with the ‘Russian Tanker’ stamina to last the full game. In view of this, there has been a huge decline in the popularity of the tactical formation because any team that manages to press the wing backs to their defensive halve stance the chance of winning the game.

Second on Grant’s script is the 4-1-2-1-2 tactical formation otherwise classified as the 4-4-2 diamond. It consist of four defenders, one defensive midfielder, two central midfielders, one attacking midfielder and two strikers.
With this formation, a coach simply has to split the two central midfielders in the traditional 4-4-2 into two. That is, pushing one in front of the defence to screen for the back four and placing one behind the two strikers to serving them with the through balls.

It ensures mobility, physical prowess and vertical movement and normally create a numerical advantage against almost every other formation as the fullbacks can bomb forward to shift it to a 2-6-2 tactical layout. Avram Grant used this formation at Chelsea where he described it as the ‘midfield magnet.’
However, if the fullbacks fail to get forward to create an outlet, the formation will collapse on itself. Again, if the midfielders get uncomfortable and loose balls quite often, it exposes a lot of holes at the left and right back, especially in situations where the fullbacks had gone to shop up front.
Last on coach Grant’s script is the 4-3-3 which is predominantly an attacking oriented tactical formation with four defenders, three midfielders and three attackers.

The main role of the central striker in this formation is managing to hold onto the ball whilst waiting for the other two forwards to run forward and he need to be skillful as well to take on defenders on his own in a one-on-one situations.

The two wide forwards needs to be pacey to put pressure on the opposing fullbacks. They must also posses the skill and techniques needed to outwit their markers at bay.

The other three midfielders must have the ability to defend as well as attack and one of them is always placed in front of the defence line to serve as a cover for the back four any time they come under pressure.
Because teams which use this formation tends to gain more possession, it becomes disastrous anytime the passing game fails because midfielders cannot provide enough coverage. For instance, if a midfielder losses the ball up front, the opponent has the ability to launch a lightening attack because there’s only one midfielder left.
To sign off for a cup of tea, I should suffix to reiterate here that coach Avram Grant proved his tactical wealth at Chelsea though he slipped at last in a penalty shootout against Manchester United at the 78,000 capacity Luzhniki stadium in Moscow, Russia and can do it with Ghana in Equatorial Guinea should luck befall him.

Everything You Need To Know About The Rare Virus, Monkeypox