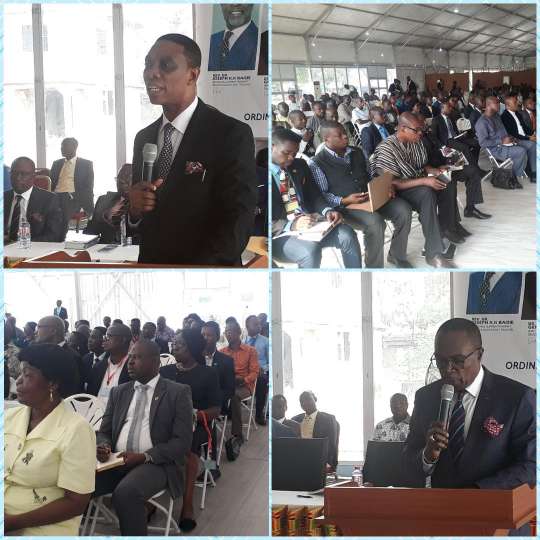 The Greater Accra East Region of Assemblies of God (AG) has held her second council meeting with a call on the church to hold on to her principles in an unfriendly world.

“True to scriptural prophecies, wolves have crept into the sheepfold. The capacity of ecclesiastical leadership and the commitment of the church define how well such canker is dealt with,” says the Greater Accra East Regional Superintendent of AG.

Rev. Dr. Joseph Baisie made this call on Wednesday at the Assemblies of God Greater Accra (AGGAR) Retreat and Resort Center, Shai Hills, in an address to the representatives of the various districts that fell within the Greater Accra East Region.

Quoting the late United States Civil rights leader Martin Luther King Jnr., Rev. Dr. Baisie observed that the church was neither master nor the servant of the state but rather the conscience of the state:

“It must be the guide and critic of the state, but never its tool. If the church does not recapture its prophetic zeal, it will become an irrelevant social club without moral or spiritual authority,” Rev. Dr. Baisie said.

The Cleric informed that AG through its leadership at all levels, took seriously her mandate of taking care of the flock of God which had resulted in church planting in fulfillment of the vision of the organization.

He told of how AG had contributed substantially to the provision of education, observing that many of their local assemblies had established schools which operated under the AG Educational Unit.

Rev. Dr. Baisie hinted that, in the face of the decaying moral fiber of society, the church’s input into shaping the destinies of the future generation through education is paramount.

“It is no secret that majority of the elite schools in Ghana are mission schools. Society must therefore learn to acknowledge the role of the church in this regard,” Dr. Baisie said.

The General Secretary of AG, Rev. Dr. Bismark Bansah, praised AG for meeting up to the challenge of establishing 2000 churches in keeping up with Vision 3000 of AG.

He also encouraged the leaders to strive to establish 1000 more churches to meet up with the vision.

Rev. Dr. Bansah, who spoke on behalf of the General Superintendent of AG, observed that the church’s fellowship should be with the Holy Spirit which meant that the church prayed endlessly, committed herself to the word of God and forgave one another so that she could fight together as a strong entity.

In addressing the issue of indiscipline and unfaithfulness among pastors, he said “that while some of our pastors are doing a good and commendable work, the same cannot be said of others; Some are unfaithful to their churches, their spouses and the organization, and this ungodly behaviors are bringing reproach to the Lord Jesus Christ, but the leaders are cracking the whip and would continue to expose such people to bring sanity into the organization.”

He cautioned part-time ministers of AG to stick to their terms of agreement and stop behaving as full time ministers.

The council meeting will deliberate on activities of the passing year, make resolution for the New Year and ordain ministers who have completed their years of training.

AG Demands That OSP Board Members Declare Their Assets