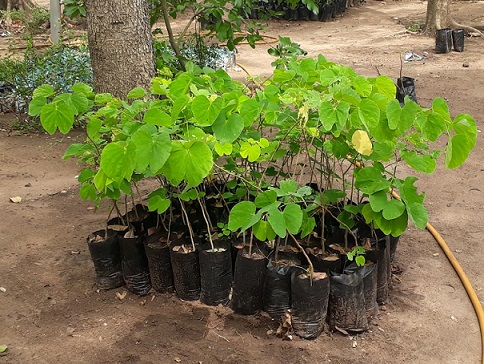 Madam Mary Kupualor, Head of the Department of Horticulture at the Tema Metropolitan Assembly (TMA)has said the greening of cities would play a vital role in the life of individuals and the development of the nation.

Madam Kupualor said the national tree planting exercise initiated by President Nana Addo-Dankwa Akufo-Addo had come at a time when TMA was determined to return Tema to its pride of not just being the Harbour and Industrial City of Ghana, but also a beautiful city decorated by a large number of flora.

She made this known in an interview with the Ghana News Agency in Tema at the TMA Horticulture Department, and enumerated the efforts to beautify the metropolis.

Madam Kupualor said the Horticulture Department had done a lot of tree planting exercise in collaboration with some churches and individuals in the metropolis.

It had worked with the Church of Pentecost which helped to plant 700 trees in 2019 at the Chemu Park and later 1,500 trees at other places within the metropolis.

She said a tree planting exercise was conducted with Kingdom Exin at the Tema Motorway Interchange, “Where we planted about 500 shade trees and shrubs that would grow and bear flowers; from the Toll Booth to the Aflao Road”.

She revealed that about 500 trees were planted with the Leo Club between the Motorway Interchange and the Ashaiman Timber Market, and 50 trees with Ahmadiya Women Society, at Communities Ten and Eleven among others.

At the centre of all the tree planting exercises was the need for the assembly to reclaim encroached lands, which were originally earmarked for greening purposes.

“Sometimes it is not easy moving people in the name of tree planting. So we are being tactful in dealing with the matter; it’s a gradual process and we will get there,” she said.

She called for education of people to develop the culture of growing trees, flowers, and beautifying their surroundings; children in particular must be educated to plant trees to impact onn their generations.

“The benefit of what we are doing would give us fresh air; we are close to Industries and the harbour, where higher carbon emissions are taking place, and supposing we have a lot of trees around, the emissions would not be directly us,” she said.

Madam Kupualor observed that the greening effort would make us live in good health as we would have medication from the trees, good shade, good environment, and food.

“Let’s embrace the idea of tree planting, let’s not do it as if we are compelled to do it; let’s do it well so we would change the floral setting of the metropolis for our benefit,” she encouraged.