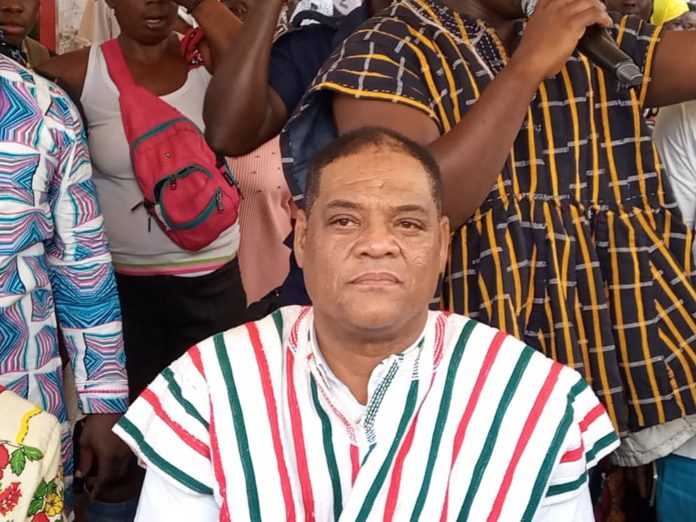 Mr Ivor Kobina Greenstreet, Flagbearer of the Convention People’s Party, (CPP) on Friday, took his “electric shock” campaign tour to the people of North Tongu in the Volta region.

Mr Greenstreet assured the people of Battor of receiving developmental shocks when the CPP is voted back to power.

He assured that ” the dead industries initiated by the great founder of the CPP and former president Dr Kwame Nkrumah will resurrect.”

He commended the people of Battor for practising good personal hygiene and pledged his support in engaging traditional rulers to transform Ghana.

The Flagbearer asked voters to vote massively for the CPP on December 7, to give the NDC and NPP an “electric shock”.

He also introduced his running candidate Professor Emmanuel Boboobi to the chiefs and electorates and urged them to vote for him to champion projects that would improve their living conditions.

Welcoming Mr Greenstreet and his running mate to Battor, Togbe Patamia Dzekley VII, Paramount Chief and President of Battor Traditional Council, commended the party for the peaceful manner they have so far conducted themselves in the run up to the elections.

He further expressed appreciation to the Party for appointing their son from the land, Professor Emmanuel Yaovi Boboobi, as the running mate for the CPP towards the December 7 Presidential and Parliamentary elections.

Togbe Patamia, who doubles as the Vice President of the Volta Regional House of Chiefs, called for peace in every aspect of all political activities in the Volta Region.

Togbe Patamia also charged all security forces to avoid acts of intimidation and unprofessional conduct in line of duty as the country prepares for the December polls.

Addressing supporters at the Battor Roman Catholic JHS park, Mrs Nana Akosua Frimpomaa, Chairperson of the Party, assured that Ghanaians would benefit from a special GHC5,000.00 insurance package to better their living conditions if the CPP return to power.

All regional and some national executives including some Parliamentary aspirants of the Party, accompanied the Flagbearer to the Region.

Richmond Owusu Frimpong declares intention to run for President in 2024

Select Committee on Health to embark on COVID vaccination campaign