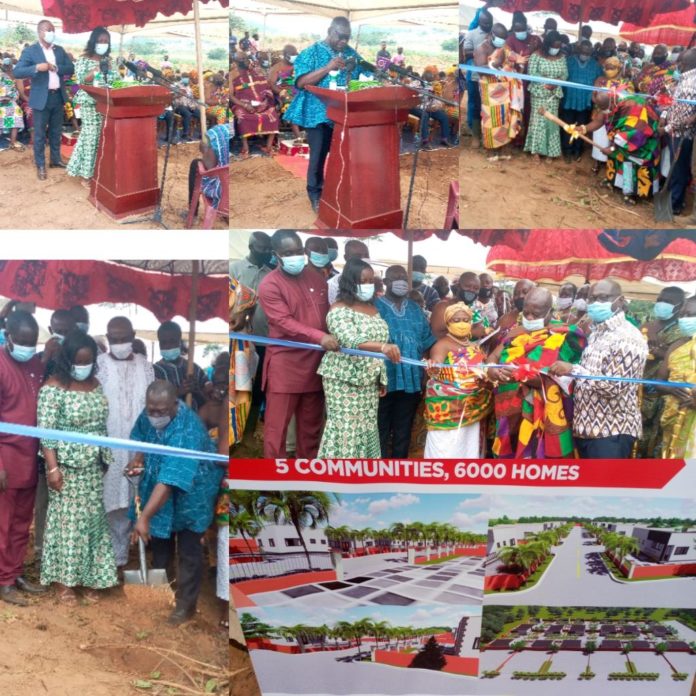 The Ghana Registered Nurses and Midwives Association (GRNMA), on Friday, cut a sod for the construction of a 6000-housing units for its members in the Nsakyi town of Akuapem South District in the Eastern Region.

The 150-acre land housing unit dubbed, “GRNMA Nurses and Midwives Village”, would comprise a one and two-bedroom self-contained apartments expandable to three bedrooms and a three-bedroom apartment.

The project, funded by the Stanbic Bank through the Ministry of Finance and the National Housing and Mortgage Fund, and supported by Omri Projects is expected to be completed within eight months after the sod cutting.

Under the scheme, the interest on the mortgage loan was pegged 12 per cent.
Mrs Perpetual Ofori-Ampofo, President of the GRNMA, said the project aimed at making it possible for Nurses and Midwives to own houses before going on pension.

The step was because the paltry pensions paid by the Social Security and National Insurance Trust to public sector workers including; nurses and midwives could not support the building or purchasing of a dream house.

Considering the high interest generated among the membership of the lands, the head office of the GRNMA, she said, was in the process of acquiring more litigation free lands within the environs of Accra to give more members the opportunity to have their own houses before retirement.

Mrs Ofori-Ampofo said the Association was also working on acquiring similar lands in all its 10 administrative regional branches for members.

The Association, as part of efforts to motivate its members, was ready to partner stakeholders including; government, employers, civil society, corporate Ghana and the media to ensure that members worked with stable minds while having secured accommodation, she said.

“We, therefore, need every nurse and midwife out there to formerly register as members of the GRNMA to fully enjoy all the good things that are coming up in the nearest future,” she said.

Nana Otobour Djan Kwasi II, the Aburihene and Akuapem Adontenhene, who chaired the sod-cutting ceremony, said the Akuapem area was elated to house nurses and midwives who played a key role in saving lives in the country.

He gave the Association an assurance of their support, to enable them to effectively execute the project.

Mr Osei Bonsu Amoah, the Deputy Minister of Local Government and Rural Development, giving the keynote address, said the Ministry guaranteed its full cooperation and support for the step undertaken by the Association.

Fortunately the Nsakyi Township had basic amenities like water and electricity, and was the best place to implement such a project, he said.

Mr Amoah, also a Member of Parliament for the Akuapim South Constituency, said the project would raise the value of the Nsakyi community and the entire Akuapem land.

He urged them to complete the project within the stipulated time frame to make it a landmark project, adding: “We don’t want any abandoned project.”