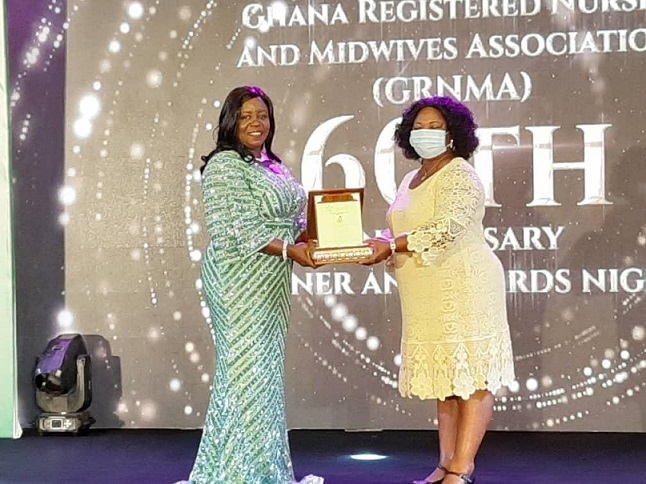 The Ghana Registered Nurses and Midwives Association (GRNMA) has honoured two past Presidents of the Association for their hard work, commitment and dedication to duty during their tenures in office.

The former l Presidents who each served the GRNMA for eight years, were Mrs Alice Darkoa Asare-Allotey and Evangelist Dr Kwaku Asante-Krobea.

They were both honoured with plaques and citations at the Association’s dinner and awards night held in Accra to climax the GRNMA’s 60 Anniversary celebrations.

Evang Dr Asante-Krobea on the other hand, served as General Secretary from 2003 to 2011, and succeeded Mrs Asare-Allotey as President from 2012 to 2019.

The citations, which were jointly signed by Mrs Perpetual Ofori-Ampofo, President of the GRNMA and Mr David Tengkorang-Twum, the General Secretary, recognised their contributions to the growth of the Association.

The GRNMA said during the tenure of Mrs Asare-Allotey as President, “The Association gained the status of a Union and acquired the Collective Bargaining Certificate. You also negotiated for the Health Sector Salary (HSS) and the Single Spine Salary Structure (SSSS) in 2006 and 2010 respectively.”

Mrs Asare-Allotey was appreciated for the establishment of the GRNMA Fund in 2005, and the solid foundation laid for the infrastructural developments of the Association and the commissioning of the first Regional hostel in the Eastern Region.

On the part of Evang Dr Asante-Krobea, the GRNMA said “As President of the Association, there was massive infrastructural development which saw you commissioning seven Regional Secretariats and hostels, earning you the accolade ‘Osiadan’.

“You also cut the sod to commence the ongoing construction of the seven-story- three-star hostel and office complex situated at the national secretariat. Through your initiative, the Association instituted the Dr Docia N. A Kisseih Memorial Lecture in her honour as founding President in 2015.”

The citation noted that under the distinguished leadership of Evang Dr Asante-Krobea, the Association transformed in name change from the erstwhile Ghana Registered Nurses Association (GRNA) to the GRNMA in 2015.

The Association also honoured 27 other past executives who served in various capacities with plaques for their leadership roles.