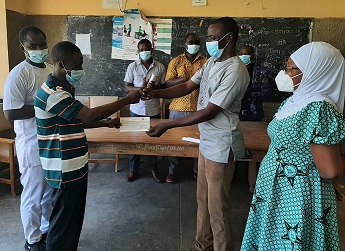 Mrs Perpetual Ofori-Ampofo, the National President of the Ghana Registered Nurses and Midwives Association (GRNMA) has presented two separate cheques to two members of the Association in the Builsa North Municipality of the Upper East Region.

This is to cater for their medical expenses.

The beneficiaries, who are in good standing, and stationed at the Saint Lucas Health Centre at Wiaga and the Sandema Hospital in Sandema, the Municipal capital, are suffering from various medical conditions not covered by the National Health Insurance Scheme (NHIS).

Mrs Ofori-Ampofo, who presented the cheques of GH¢15,000.00 at Wiaga and GH¢10,000.00 in Sandema through Mr Thomas Lambon, the Upper East Regional Chairman of the Association, said the GRNMA took keen interest in the welfare of its members across the country.

“Six per cent of monthly total dues deducted from Controller and Accountant General’s Department (CAGD) goes into the GRNMA’s Health Fund. This seeks to address the cost of ailments that fall outside the remit of the NHIS for members,” she said.

She said the Association had issued seven cheques, which amounted to a total of GH¢125,000.00 to support sick members in good standing in the Bolgatanga, Builsa North Municipalities, and the Binduri District of the Region after leadership received information of the ill health of six members.

Mrs Ofori-Ampofo, through the Regional Chairman, who was in the company of some Regional and Municipal Executives, took time to engage nurses and midwives at Wiaga to explain operations of the Association and how dues of members were expended.

She reminded members that the Association had three main deductions; the dues, building level and the Nurses’ Fund, two per cent of the basic salary of workers were deducted as dues, and GH¢20.00 was also deducted monthly towards the Regional and National Secretariat projects.

“Hostels are constructed across the country with one National Secretariat to serve as office for the Association and temporal places of abode for members at discounted rates.

“Seven have been completed, six fully furnished and inaugurated one yet to be furnished, and three are at various levels of completion,” the National President said.

On the Nurses fund, Mrs Ofori-Ampofo also reminded members that an amount of GH¢50.00 was deducted from members into the fund, saying “It is currently being invested and managed by Axis Pension Limited.”

Managements of the two health facilities expressed gratitude to leadership of the GRNMA for the gesture extended to their staff, “It is not just the amount, but the gesture.

It is not our wish to fall sick, but when it happens, we need support as individuals, Dr Isaac Awaedem, of the Saint Lucas Health Centre said.

At the Sandema Hospital, Mr Prosper Asandem, the Health Service Administrator and Mr Stephen Adombire, the Acting Nurses and Midwives Manager both thanked leadership of the Association on behalf of Management and the beneficiary staff for the support, “This is not the first time the Association is helping our staff, and we appreciate the gesture.”