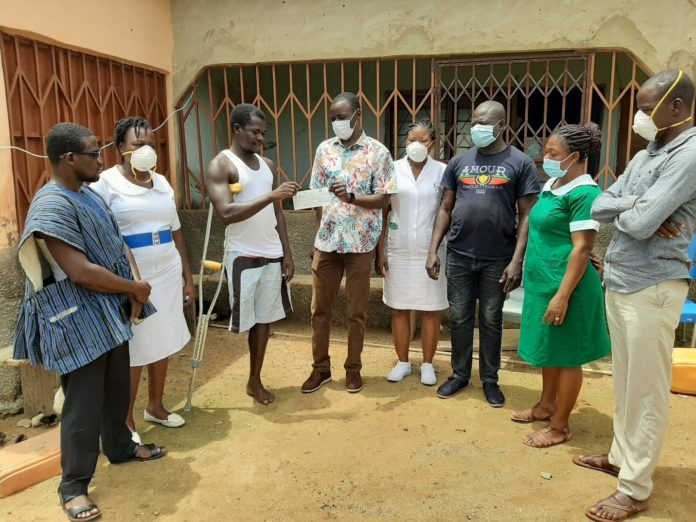 The Upper East Regional Chapter of the Ghana Registered Nurses and Midwives Association (GRNMA) on Monday presented a cheque for GHC8,000.00 to two members of the Association to cater for their medical expenses.

The members, Mr Thomas Agombire, who had his right leg amputated after an accident received GHC5,000.00 while Mr Osman Issahaku, who underwent a surgical operation, also received GHC3,000.00.

Mr Thomas Lambon, the Upper East Regional Chairman of the GRNMA, who led a team of Regional and Municipal executives and some members of the Association to present the cheques, said the donation was part of benefits members in good standing were entitled to in difficult times.

He said the employer paid 50 per cent of the treatment cost not covered by the National Health Insurance Scheme (NHIS) and the members paid the remaining 50 per cent.

“The Association in its wisdom decided to take up the 50 per cent cost that members in good standing should have as part of their welfare package. This is one of the social packages that the GRNMA has for its members,” he said.

The Chairman, who is also an Anaesthetist at the Upper East Regional Hospital in Bolgatanga, used the opportunity to call on members of the Association to communicate their troubles through their local executives to the national level for assistance.

“We don’t pray that our members should fall sick, or be involved in these conditions, but if the unfortunate happens, let’s communicate. If members don’t inform us in the Region to also inform the national level, the support will not come,” he said.

“Without unity, we can’t achieve what we want as an Association,” he said.

Mr Issahaku, a beneficiary and the Binduri District Chairman of the Association, expressed gratitude to the GRNMA for the support.

“I feel a sense of belonging. It is fulfilling to have people stand up by you in your time of trouble. It was a trying moment for my family and me when I had to undergo this operation.”

He called on members to dispel the notion that the Association was only interested in the payment of dues and not the welfare of members.

“The GRNMA is an Association you can count on. No nurse or midwife should hesitate to belong to the mother Association,” he said.

Mr Agombire thanked the Association for the recognition and support and said the leadership was in constant touch with him since the accident.

“My family and I are very grateful for this kind gesture. I thank both Regional and national leaderships for this support,” Mr Agombire said.