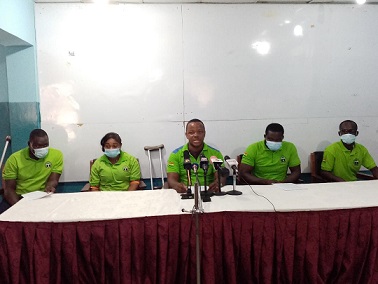 The Ghana Society for the Physically Disabled working with the Tools and Route Management, on Tuesday appealed to the Government to help its members who were unlawfully dismissed from various Toll Booths across the country.

It said over 20 Members had been unlawfully dismissed from their respective workplaces by the Tolls and Routes Management Limited.

Mr Avumatsodo Ellah Ametorkorku, Leader of the members of Ghana Society the physically Disable working with Toll and Routes Management, speaking at a press conference organised by the Group, said the Roads and Highways Minister’s public declaration of employing 50 per cent of Persons living With Disability (PWD) was not realised as 22.80 per cent was currently the reality.

“When Ghana Highways Authority were managing the Toll stations, persons with disability working at the Toll stations were almost forty percent (40%) plus but this figure has reduced drastically by the private company called Tolls and Routes Management Limited,” he said.

He said the company brought in faulty equipment which created losses due to inaccuracies leading to some being labelled as thieves, resulting in their unlawful dismissal.

Mr Ametorkorku said the Government through the Ghana Highways Authority always collaborated with applicants living with disability ( PWD) to work at the closest toll station, adding that the company changed that policy when it took over as a result, making the working conditions poor and inaccessible to PWDs resulting in the alienation.

“This company started eliminating (sacking) our people since August last year (2020). We reported to the authorities but nothing better has come out of it,” he said.

He stated that the Company had imposed unreasonable targets on toll collectors at the various toll stations, and that the targets were set without the involvement of disabled workers but they were expected to achieve the targets, adding,” meanwhile our monthly salary has never changed.”

Mr Ametorkorku said their salaries were being delayed.

“Mr. President, upon all the maltreatment, increments of targets and abuse, over time working without pay, the company don’t pay our monthly salary on time, they always pay later in the month,” he stated.

He said they, the PWD toll workers had been sacked for false reasons were pleading with the government to act now in order to bring relative comfort back to their homes.

Mr Ametorkorku said they were yet to receive assurance of consistent payment of salaries given by Mr Kwesi Amoako Atta, the Minister of Roads and Highways, on November 2020, during the closure of Kubeasea toll station for maintenance.

He said they approached the company (Tolls and Routes Management Limited) through the Ghana Federation of the Disabled (GFD) and that the response they had from the company was, they were not employees of the company, adding “it was a heart breaking news to us.”