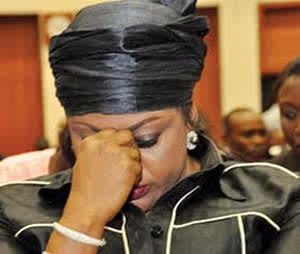 A political organisation under the aegis of Concerned Anambra North Peoples Democratic Party Stakeholders has asked the national chairman of the PDP, Dr Iyorchia Ayu, to order a former Minister of Aviation, Stella Oduah, to produce her National Youth Service Corps certificate or be disqualified from participating in the party’s primary for Anambra North Senatorial election.

The organisation in a petition to the party’s national chairman, signed by Sylvester Nnalue and Emmanuel Uduaka, said Oduah should be disqualified for presenting doubtful documents and credentials all of which they said were in the custody of the Independent National Electoral Commission and the public domain.

They attached to the petition INEC Form C.F. 001 in which Oduah claimed she had lost her NYSC certificate. It was on the basis of this claim that she was elected into the Senate

A copy of the documents and petition was obtained by journalists in Abuja on Sunday.

Several calls, SMS and WhatsApp messages to to Senator Oduah for response were not replied.

The stakeholders said the documents and credentials having now been subjected to verification were found to be doubtful or non-existence.

In 2014, Oduah deposed to an affidavit and obtained a police extract (both documents were attached to the petition) where she stated that she obtained a First School Leaving Certificate from St. John Odoakpu, Onitsha.

However, upon an enquiry to the Ministry of Basic Education, Anambra State in 2019, it was discovered from their response that Senator Oduah was never among the pupils that sat for FSLC in 1973 in the Old East Central State of which the present Anambra State was part of. Thus, her claims of obtaining FSLC in 1973 are false and misleading”, the stakeholders said.

They attached a Certified True Copy of list of pupils who sat for the exams in 1973.

In the same affidavit and police extract submitted to INEC by Oduah, she also claimed to have participated in the NYSC in 1983 and that she lost the discharge certificate issued to her by the NYSC.

However, instead of applying to the NYSC headquarters for a letter of confirmation indicating her NYSC number and the year she did the service, Oduah submitted a letter from Nigeria Employers Consultative Association purportedly confirming that she participated in NYSC.

The PDP stakeholders in Anambra North said this claim was doubtful saying NECA is not in a position to confirm whether Oduah did NYSC or not.

The stakeholders are demanding that the PDP screening panel subject Oduah to strict documentary proof of all her claims on primary school attendance, certificate and the NYSC.

They also drew the attention of the screening panel to item number f of the PDP Primaries Screening Exercise Brief Forms which harps on integrity where aspirants were expected to answer questions like ‘Were you ever indicted by an administrative or judicial panel of enquiry’.

Thestakeholders said: “Senator Oduah was indicted by the House of Representatives in 2013 as well as a Presidential Panel of Enquiry in the same year over the bullet proof BMW scandal. She is also undergoing criminal prosecution.”

They urged the screening panel to disqualify her from participating in the primaries and that the party would be taking a risk if it sponsored an unqualified candidate for the 2023 general elections.

They reminded the party that a candidate of any political party who claimed documents that were misleading/unverifiable jeopardises the seat of that party it won in a general election in the event of a pre or post- election inter party litigation.

The Electoral Act 2022 in section 29 (8) also imposes a fine of N10 million on the party that sponsored an unqualified candidate.

By Anifowoshe Ademola – an investigative journalist with Sentinel Newspaper