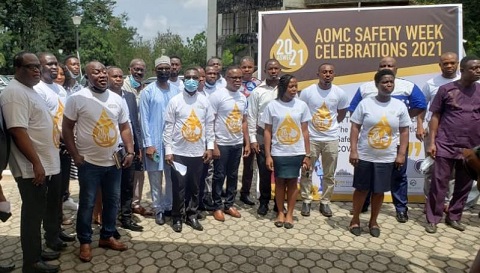 Professor Alex Dodoo, the Director-General of the Ghana Standards Authority (GSA), has called on Oil Marketing Companies (OMCs) to employ health and safety officers at filling stations to enforce the standards.

He said transparency, education, accountability and certification were crucial in ensuring safety in the oil marketing sector.

Prof Dodoo said this at the launch of the 2021 Safety Week Celebration, instituted by the Association of Oil Marketing Companies (AOMCs) to enforce health and safety standards within the industry.

It was on the theme: “Reinforcing Positive Behaviour at the Workplace to Achieve Safety in this era of COVID-19 pandemic”.

As part of activities for the Week, experts from the oil marketing industry, regulators including the National Petroleum Authority, Energy Ministry, the Police, National Security Ministry, and National Fire Service would brainstorm and devise ways to improve safety in the industry.

Mr Henry Kwabena Kokofu, the Executive Director of the Environmental Protection Agency, said the Agency would strictly hold state institutions and industry players accountable for any disregard of the laws.

“Attitudinal change is crucial to transforming the sector. If we don’t change our attitudes, it will be difficult to get to where we want to get to”.

The Inspector-General of Police (IGP) James Oppong Boanuh, in a speech read on his behalf, said the Police Administration would clamp down on armed robbers attacking retail outlets, adding: “The police will not ignore its lawful mandate.”

“We are committed to our constitutional mandate of protecting property. Criminals who attack retail outlets are operating as a network with some of your employees. Check the backgrounds of the people before you employ them and crosscheck from Police as we have a database of all criminals,” he said.

“Engage the Ghana National Fire Service to train your personnel in order to overcome occupational hazards”.

Mr Henry Akwaboah, the Chairman of the AOMC Board of Governors, charged the companies to consistently enforce safety protocols at workplaces.

“Achieving incident-free operations within the industry, offices and retail outlets is a collective responsibility that requires all hands on deck,” he said.

“The theme is a reminder to all that achieving incident-free operations at workplaces requires the involvement of all persons in the organisation, from the Chief Executive Officer to the lower rank under the chain of command”.

He said leaders of organisations must demonstrate unwavering personal attitude to inculcate such character in the employees.

Mr Kwaku Agyemang-Duah, the AOMC Coordinator, explained that the outcome of deliberations would be compiled to enhance learning outcomes for industry players to intensify public education.

He noted that the Association would strictly enforce safety and other regulated laws to ensure safety and protection of the industry.

Mr Agyemang-Duah said any OMC who failed to comply with standard protocols would be exposed, arrested, and prosecuted to deter others from wrongdoing.