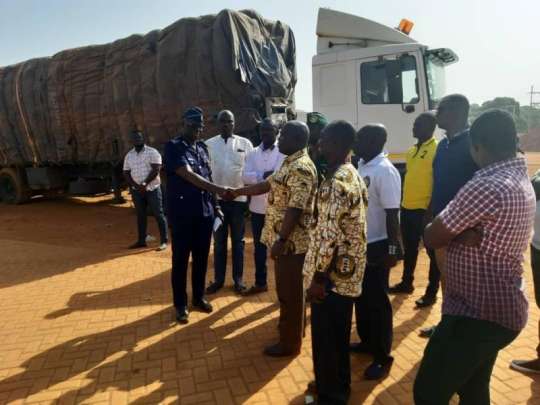 The Ghana Shippers’ Authority (GSA) has provided a facelift at the Hamile Truck Park to promote transit trade which formed part of its Corporate Social Responsibility objectives.

The construction of the facility was at the behest of the Hamile Border Security Committee (BORSEC) when the GSA visited the border post during one of its transit trade stakeholder engagements.

The one-acre size truck park located in Hamile, a border town in the Upper West Region, will serve as a rest stop for transit truck drivers who haul goods between Ghana and the landlocked countries of Burkina Faso, Mali and Niger.

The park, which used to be muddy and dusty during wet and dry seasons, has now been paved with pavement blocks, to provide convenience for drivers and other transit trade stakeholders.

At a brief ceremony, the Kumasi Branch Manager of the GSA, Mr Emmanuel Kwarteng, on behalf of the Chief Executive Officer (CEO) of the Authority, handed over the facility to Mr J. D. Anaman, Customs Officer-In-Charge of the Hamile Border.

He re-echoed the GSA’s commitment to promoting Ghana’s corridor as the preferred transit trade destination and mentioned the Authority’s quarterly fact-finding trips on the corridor, periodic engagement of truck drivers on road safety and traffic regulations among others as testaments.

Mr Anaman, who also doubles as the Head of BORSEC, expressed appreciation to the Shippers Authority for responding to the Committee’s appeal for a facelift.

The event was witnessed by members of BORSEC, officials from the Bureau of National Investigations (BNI), Port Health, Defence Intelligence (DI), Ghana Immigration Service (GIS) and some freight forwarders.